Army veteran Yvette Paz believes the illness tests one’s mental state as much it does the physical. The virus is a solitary war, she said. 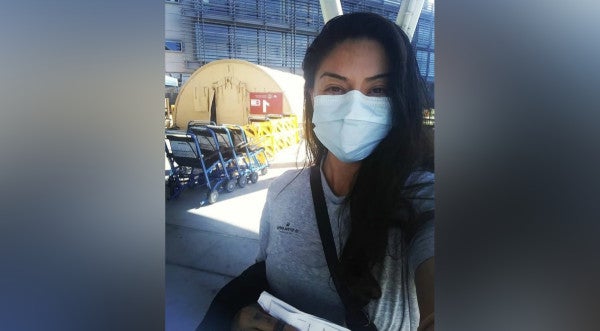 Survivors of the COVID-19 virus face two battles: one of physical health and one of loneliness.

Army veteran Yvette Paz has become well-acquainted with this war on both fronts since she was diagnosed with COVID-19 early last month.

The 30-year-old Huntington Beach resident believes the illness tests one’s mental state as much it does the physical. The virus is a solitary war, she said.

“Nobody wants to come around me,” Paz said. “It’s very painful. Although I have been cleared for two weeks now, you have this stamp on you, this mark, almost as if you are not clean anymore. You are this dirty individual.”

Paz described the lingering mental health effects of the virus as “a pandemic on its own.”

“You get so much love, but there’s also so much fear and hate,” Paz said.

Paz woke up on the morning of March 9 with dizziness, a headache and extreme muscle aches. But she didn’t think it was serious.

“It was almost as if I had a really intense workout,” she described of the muscle aches. “To be honest, I didn’t think much of it because I work out all the time.”

But the pain became severe enough that she stayed in bed for two days. Any time Paz stood up, she was overcome by dizziness.

She knew something was wrong when she woke up on March 12 with a sore throat.

“It was as if glass was scratching up and down my throat,” Paz said.

Then came the fever and cough, one so bad that she was gasping for air after each fit. Paz went to the Veterans Affairs hospital in Long Beach and was tested for COVID-19. Medical personnel told her to stay quarantined in her room until the test came back. She was sent home without any medication.

‘My mind was upside down’

On March 16, an official from the California Department of Public Health told Paz over the phone that she had COVID-19.

“My mind was upside down,” Paz said. “I had started to feel better. I really thought that maybe it was just the flu. My energy started to come back. The fevers kind of calmed down. The achiness of the throat went away but I still had the cough.”

Paz was instructed to stay home and to check into a hospital if her symptoms worsened. Later that night, she had a coughing fit that left her gasping for air as if she had been drowning.

“That’s when I got really nervous because I had never felt anything like that before,” Paz said. “That prompted me to go to the hospital a second time. They did the testing and saw along with coronavirus, I had developed severe pneumonia.”

Paz was admitted to the hospital that night and went on to spend five days there, all of which were frightening and lonely, she said.

“It is a completely unique experience because you go through it completely alone,” Paz said. “You are by yourself. You can’t have friends and family. You have no support.”

Being in an observation unit, Paz’s only exposure to other people was nurses and doctors bedecked in depersonalizing safety gear. Paz said because hospital personnel had to get dressed in the gear prior to entering the room, it made her nervous in case there was an emergency.

‘The first two days were a blur’

“It was exhausting,” Paz said. “The first two days were a blur.”

Paz began documenting her journey with Facebook videos, a way to stay connected with others and inform those of the dangers of the virus. The first video she made was viewed 27,000 times.

“I was blown away,” Paz said. “I felt it was my responsibility to share my story.”

But her condition worsened.

That day, she suffered a coughing fit that left her with tears in her eyes. It felt as if her lungs weren’t inflating.

“They were afraid to let me go because if I caught anything else, it could be fatal,” Paz said.

Instead, Paz became one of the first Americans to try the anti-malaria drug, hydroxycholoroquine, which some contend could be used to treat COVID-19. President Trump has touted the drug as a “game-changer,” though there is significant skepticism from the medical community about the efficacy of its use as a treatment for the virus.

“You can feel that there is a battle going on inside of your body,” Paz described the first days of the treatment. “It was like that for 2½ days. You are sweating through your sheets and your clothing.”

Paz’s white blood cell count increased, and her symptoms subsided enough that she was sent home on the fifth day of her hospital stay and the second day of treatment.

Paz said it’s impossible to know whether the drug was responsible, but she believes it was her savior.

‘It stays with me’

Her treatment ended on March 24, and she was cleared by her doctors about two weeks ago.

“By the time I finished the trial, I felt incredible,” Paz said. “I am still recovering, but every single day is better than the last.”

While COVID-19 took a physical toll on Paz, she’s also still wrestling with the loneliness.

“You come out of an experience like that and it is so mentally draining,” Paz said. “You end up back in your room quarantined. My mother helped me out a lot. I stayed in her house during quarantine. But the only interaction we had was her putting food on the table outside. Nobody wants to come near you.”

Paz said she hasn’t eaten with her family, and only one friend has visited her. Her friends and family all tested negative for COVID-19.

“I feel like I have this stamp like, ‘Oh, nobody look in her direction because you are going to get sick,’” Paz said. “It’s something that stays with me even though I’ve been cleared.”

Paz said she received many negative comments for recently posting a video of she and her best friend dancing on Facebook. Many accused her of endangering her friend.

Paz thinks the negative public reaction is indicative of what discourages others from sharing their experiences with the virus.

“I think that a lot of people are not sharing their stories and are not saying anything because they don’t want to be classified or labeled,” Paz said.