Family and friends are remembering CREC Civic Leadership High School music teacher Megan Arsenault as a passionate and authentic former U.S. Army captain whose effervescent personality lit up every room she was in 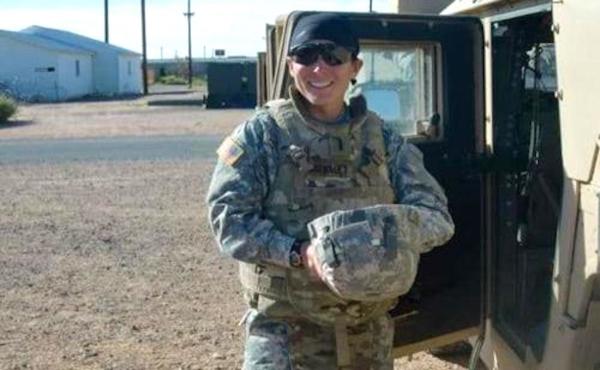 ENFIELD, Conn. — Family and friends are remembering CREC Civic Leadership High School music teacher Megan Arsenault as a passionate and authentic former U.S. Army captain whose effervescent personality lit up every room she was in.

Arsenault, 37, was killed in an accident Thursday afternoon when the motorcycle she was driving collided with a sport utility vehicle on South Road. The accident remains under investigation by police.

Alexa Arsenault, Megan’s wife of less than a year, said, “The only words I can use to describe her is extraordinary. That’s who she was.”

Alexa and Megan met in 2016 through Megan’s younger sister and were married in October.

Alexa remembers Megan as someone who — whenever she walked into a room — would make the place brighter, all with a simple look, laugh, or smile.

A vigil held in Megan’s honor on Sunday at the CREC Civic Leadership High School on King Street brought together at least 200 people — friends, faculty, and former and current students — who grieved together while also celebrating her life.

Alexa said the vigil offered her some peace of mind just hearing how Megan was beloved by all.

She said it was nice to know Megan wasn’t just her light but everyone’s light, and how she touched the hearts of everyone she met.

Alexa said Megan’s legacy will live on as the high school’s auditorium will be named in her honor and a scholarship fund will be established on her behalf.

Jeff Larson, principal of the CREC Civic Leadership High School, said Megan was the absolute cornerstone of the high school and embodied its mission of civic leadership and giving back.

A music teacher at the high school since 2013, Megan loved her students and greeted them when they walked through her door with a smile that lit up the room, Larson said.

Her spirit, Larson added, was accepting and fierce and she will be impossible to replace.

Jamie Roderick, a Spanish teacher at the high school, said words would never be enough to describe Megan as a person, but the Army veteran made Roderick feel seen.

Megan challenged her thinking, empowered her, and opened her eyes, she said.

“What’s helping me is thinking about the gift Meg was and will always be. She was bigger than she knew,” Roderick said.

Megan exuded “American pride” not in a flashy, over-the-top way but by creating a new image of an American hero, what with her 5-foot-2 stature and sexuality, Roderick said.

She was passionate, authentic, and fun-loving, Roderick said.

“She was small, but she lived mightily,” she said.

Valarie Lishnak, the faculty athletics manager, said Megan’s death is a huge loss, with not even Megan realizing the impact she had on others.

At the high school, Megan was a safe space, a place where students knew they could go and never be judged, Lishnak said.

A kind and loving soul, Megan was always good for a laugh and never had anything but a smile on her face, she said.

William King, a technology teacher at the high school, described Megan as a “tough as nails” person who loved her job.

King said Megan turned her classroom environment into an episode of the TV series “Glee,” what with her students singing and dancing all the time.

He added that Megan also loved being outdoors, camping and hiking.

She was just someone who King will remember as a constant source of joy and laughter.