For the last month, Army reservist Lt. Colonel Kamal Kalsi, an emergency room doctor in New York, has been scrambling to find a way to quickly mass produce ventilators, equipment that could save the lives of thousands of coronavirus victims nationwide 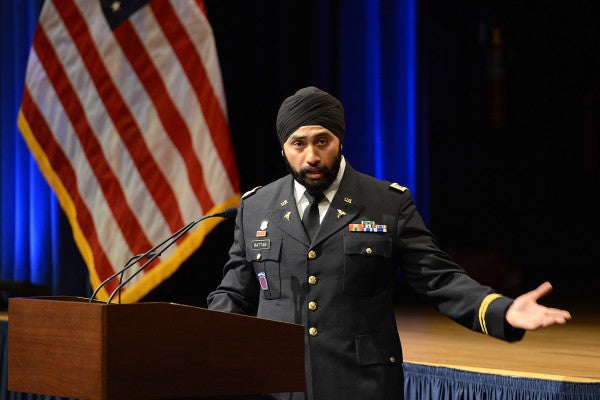 SACRAMENTO, Calif. — For the last month, Army reservist Lt. Colonel Kamal Kalsi, an emergency room doctor in New York, has been scrambling to find a way to quickly mass produce ventilators, equipment that could save the lives of thousands of coronavirus victims nationwide.

Two weeks ago, he thought he’d found a company in Sacramento with the perfect answer.

But then, as he tells it, necessity took a back seat to business.

The firm Kalsi contacted wanted tens of millions of dollars before they’d help him, he said.

Hearing that, “tore me up a little,” said Kalsi. “I understand. It’s a capitalist system.”

In the days since he received that news, he has pleaded, plotted and begged for access to the design plans of a very small, very useful, very inexpensive ventilator. Kalsi’s race to help COVID-19 patients and their families stave off catastrophe comes as the novel coronavirus spreads across the United States and debate sharpens over federal versus state responsibility.

Though President Trump last week ordered General Motors to begin making ventilators, he has been hesitant to use the Defense Production Act, a Korean-War-era edict that allows the commander in chief to commandeer resources, and to provide centralized logistics and support that could help states obtain needed supplies.

Instead, the federal government has largely left states to procure supplies like masks and gowns themselves. The scramble has left those states, cities and even hospitals competing against one another in a free-market response to the pandemic.

Adding to the tension, state governors, including California Gov. Gavin Newsom, are balancing those dire needs with the challenge of maintaining harmonious relations with the federal government, including a president who values kind words.

That, said Kalsi, has left him unable to procure a means to make the potentially life-saving devices before they slip into the mass market, where availability could be determined by luck and money.

“This just needs to happen,” said Kalsi, a disaster medicine specialist who ran triage hospitals in Afghanistan. “If we don’t get ventilators in the next week or two in New York, it’s going to be a bloodbath.”

The ventilator Kalsi sees as the solution is the Go2Vent, made by Vortran Medical in Sacramento and sold for about $100 each, though there is no proof it could be the panacea that he envisions. Vortran’s founder and chief medical officer, Dr. Gordon Wong, declined to comment, other than to say Friday he was close to inking a mass production deal with a venture-capital backed manufacturer in Chicago.

The Go2Vent looks a bit like an ill-conceived bong: A long clear plastic tube that connects to a small chamber that in turn has two pipes, all with electric blue connectors. But to Kalsi, it’s value is obvious in part because of its plastic simplicity — which he thinks a 3-D printer could replicate.

“One of my paramedics actually showed it to me and immediately it struck me that this could be repurposed to fill the ventilator gap that we are facing right now,” Kalsi said.

The Go2Vent was designed for emergency use and disease outbreaks. It requires no electricity, running off the pressure of an oxygen tank, and can fit in a small suitcase and be set up in minutes.

Online marketing materials predict its value in this moment with disturbing precision: “In the event of a ventilator surge capacity, the stockpiling of full feature ventilators is not economically feasible for any local or regional facility,” Vortran wrote in a technical bulletin posted during the H1N1 Swine Flu pandemic in 2009, which killed more than 12,000 people in the United States.

“In the event of a pandemic of national or global proportion, it is unrealistic to expect quick or timely response from the state or federal governments. The [Go2Vent] with monitor, when incorporated with the proper filters, offers a viable solution to your ventilator shortage. It would free up your full featured ventilators from your ICU to manage your most difficult … patients.”

Kalsi and a fellow veteran, Matt Zeller, who Cofounded a nonprofit to help military translators, quickly put together a plan they thought could get thousands of Go2Vents to hospitals in days.

In early March, they tapped a network of former military and policy experts from the Truman National Security Project, a left-leaning network of military and policy wonks of which they are both members. They quickly put together a loose working group of political and business contacts who thought they had the resources to use 3-D printers to both produce and distribute the ventilators in an open-source, not-for-profit model.

A key part of the plan, said Zeller, was centralized planning that would ensure the ventilators reached hospitals most in need and that would move the units to other facilities once that need subsided. Eventually, said Zeller, he wanted the units sent to the national stockpile for future outbreaks. Their shelf life is five years, according to Vortran.

The “linchpin” of the project, said Zeller, was obtaining the design specifications of the device.

So they contacted Vortran and asked for them, said Kalsi.

Depsite multiple conversations with company officials last week, the answer, said Zeller, was not what he hoped to hear.

Zeller and Kalsi said they variously talked with Wong and others at the small company who told them they were not interested in giving the plans away, or even licensing them.

They would, however, sell the company, Zeller said he was told.

Zeller said Wong, one of the Vortran founders, told him “that if I had called him two weeks ago they would have entertained offers between 30- and 40 million [dollars] but now it was significantly north of that.”

Kalsi and Zeller again tapped into their network of state and federal contacts last week, this time to try to put political pressure on the firm to provide access to the design, or even have the DPA used to force the issue.

Zeller said friends reached out to governors in multiple states for help, including Newsom.

“Corporate profits should never be placed ahead of human life, and this is exactly why the [Defense Production Act] should come in and force these guys to play ball,” said Kalsi Friday. “We’ve been working to push the governor of California to push these guys.”

Kalsi said he heard back that Newsom’s office wasn’t sure it had the power to compel anything. Legal experts say the issue is clear, noting Newsom has declared a state of emergency.

“When there is a proclamation of a state of emergency, the governor of California is vested with the power to commandeer public and private property,” UC Berkeley constitutional law expert Erwin Chemerinsky said in an email.

If the governor did so, he added, the state would have to pay “just compensation.”

Newsom’s office did not immediately reply to a request for comment.

The governor’s approach to the pandemic has been one of putting the carrot before the stick. Saturday, touring a San Jose factory that was working to get old ventilators ready for use, he announced that the federal government had sent 170 broken ventilators to Los Angeles.

Newsom also said Saturday that, in total, the state has procured and identified 4,252 ventilators toward a goal of securing 10,000 in response to the coronavirus pandemic.

Meanwhile, as Vortran officials were pushing off Kalsi and his team, the company was looking for compensation in other places: Ramping up production of the Go2Vent and entertaining more lucrative offers.

Greg Latimer runs a plastic injection molding and manufacturing company in Reno that has produced the Go2Vent for Vortran since 1997.

Now, “that order has exponentially increased,” said Latimer. “We are ramping up in a bizarre way right now trying to stay ahead of the curve.”

He said he is running his factory 24 hours a day, but “it will take a long time to fulfill” the orders.

Latimer said he doesn’t know who’s buying the devices, but “I am wondering if it might be the government.”

He’s committed to getting the ventilators out as fast as he can. His company is centered on philanthropy, with most profits donated to charitable causes. Last year, he said, it gave out about $800,000.

“Never have I felt so needed as I have now,” he said.

But Vortran may not need Latimer much longer. On Friday, the company was in discussions for a deal with Chicago-based 3-D manufacturer and distributor Fast Radius, according to Wong.

On Saturday, Fast Radius founder and CEO Lou Rassey largely declined to comment on the record, saying only that his company is in talks “to see if we can be one of the partners that really help them scale and bring an important product to market.”

Zeller and Kalsi both said they don’t care who produces the Go2Vent, as long as it happens quickly.

“Whatever solution presents itself and is viable, we should run with it,” said Zeller. “I wish I had called them two weeks ago. I really wish our government, particularly at the federal level, had prepared for this.”