A former Army staff sergeant who took on enemy fighters at close range, first with an M249 light machine gun and then with a knife, will be the first living veteran of Operation Iraqi Freedom to receive the Medal of Honor 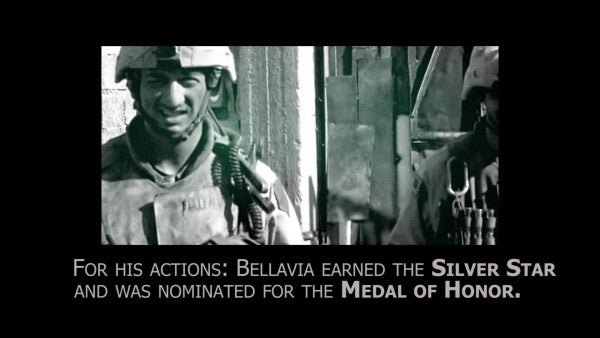 A former Army staff sergeant who took on enemy fighters at close range, first with an M249 light machine gun and then with a knife, will be the first living veteran of Operation Iraqi Freedom to receive the Medal of Honor, Military.com has learned.

David S. Bellavia, 43, of Batavia, New York, will have his Silver Star upgraded to the highest military award for valor in a June 25 ceremony at the White House, a source close to Bellavia confirmed to Military.com. The news of the award was first posted at the American Legion's Burn Pit blog Thursday and then confirmed by Army Times. The White House is expected to announce the award next week.

Bellavia's Silver Star citation, for heroism on Nov. 10, 2004, in Fallujah, Iraq, reads like the script of an action movie. An infantryman with Company A, Task Force 2-2, 1st Infantry Division, Bellavia was ordered with his platoon to clear a 12-building block in which “jihadists” were taking shelter in order to fire on American troops, according to the citation.

After clearing the first nine buildings and finding only weapons caches, Bellavia and four other soldiers entered the tenth and found themselves under fire from insurgents. As more soldiers rushed in to reinforce the five, the close-quarters combat became hot and intense, and troops began to go down with injuries due to small-arms fire and debris.

“At this point, Sergeant Bellavia, armed with an M249 SAW gun, entered the room where the insurgents were located and sprayed the room with gunfire, forcing the Jihadists to take cover and allowing the squad to move out into the street,” the citation reads.

In the street, the soldiers came under fire from enemy fighters shooting from the building's roof. As they took cover in an adjacent building, Bellavia went back into the street to call in a Bradley fighting vehicle to shell the structures. He then went back into the first building to see whether any insurgents remained alive, according to the citation.

He would find himself one man pitted against a house full of armed enemy fighters.

“I wanted that revenge. I wanted to be that leader that I promised I would be,” Bellavia later said about the fight, according to a 2016 Army release. “A light switch went off.”

He first encountered an insurgent with a rocket-propelled grenade launcher and gunned him down.

“A second Jihadist began firing as the soldier ran toward the kitchen, and Bellavia fired back, wounding him in the shoulder,” the citation reads. “A third Jihadist began yelling from the second floor. Sergeant Bellavia then entered the uncleared master bedroom and emptied gunfire into all the corners, at which point the wounded insurgent entered the room, yelling and firing his weapon. Sergeant Bellavia fired back, killing the man.”

Bellavia continued fighting, killing the insurgent upstairs. Then, another insurgent jumped out of the wardrobe in the bedroom where he was hiding, and began “firing wildly around the room and knocking over the wardrobe.”

The insurgent was shot and wounded by Bellavia, but got away. As Bellavia tried to pursue him into the second floor of the building, the soldier slipped on stairs slick with blood. Regaining his footing and climbing the stairs, he threw a fragmentary grenade into the upper room, flushing the insurgent onto the roof.

“Hearing two other insurgents screaming from the third story of the building, Sergeant Bellavia put a choke hold on the wounded insurgent to keep him from giving away their position,” the citation reads. “The wounded Jihadist then bit Sergeant Bellavia on the arm and smacked him in the face with the butt of his AK-47. In the wild scuffle that followed, Sergeant Bellavia took out his knife and slit the Jihadist's throat.”

He would continue to fight and fell insurgents until he was joined by five other members of the platoon, his citation states.

Bellavia left the Army in 2005 after six years of service and would go on to co-found the political advocacy organization Vets for Freedom. He documented his military experiences in “House to House: An Epic Memoir of War,” co-written with John R. Bruning and published in 2007.

The long-awaited and historic Medal of Honor comes as the Pentagon concludes a wide-ranging review of valor awards from the conflicts following Sept. 11, 2001. Bellavia's Medal of Honor upgrade will be the third for the Army and the fifth overall as a result of the review.

SEE ALSO: 8 Unbelievable Stories From The Second Battle Of Fallujah