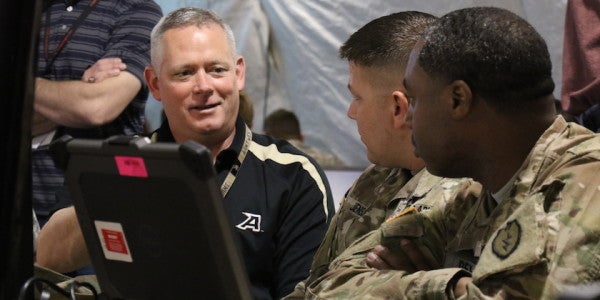 Civilians with expertise in cybersecurity could be directly commissioned into the Army with a rank up to colonel to help the service improve its expanding cyber domain operations under a Pentagon pilot program authorized in recent weeks.

The program would be similar to the Army’s direct commissioning programs for medical doctors, lawyers and chaplains, which place experts in those fields into the Army at a rank that is commensurate with their experience in the civilian sector, said Army Brig. Gen. Patricia Frost, the service’s cyber director for operations and planning. The Pentagon tasked the Army with the project on Jan. 30.

In June, then-Defense Secretary Ash Carter announced the Pentagon would begin looking at broadening its direct commission program to help it attract leaders who have had success in the private sector, especially in fields where the military needs to improve rapidly. Congress has given the Pentagon through 2020 to study the potential of expanding direct commissioning programs.

Cyber is a relatively new sector within the Army. Army Cyber Command was established in 2010, and the service has worked to quickly grow its force. It has had to pull units directly into the cyberspace battle just as quickly as it can train them, Brig. Gen. J.P. McGee, Army Cyber Command’s deputy commander for operations, said Wednesday.

Those adversaries, largely nation-states, are rapidly expanding their abilities in cyberspace, McGee said.

“Cyberspace threats and challenges are only continuing to increase, and we’re continually trying to keep pace with our defensive measures as we’re going along,” he said.

That’s why commissioning civilian experts directly into the Army as cyber operations officers could help the service fill some of its capability gaps as it continues to develop its abilities to train soldiers in the field, he said.

The Army will start on a small scale with the cyber direct commissioning pilot, Frost said. The service has yet to determine exactly what expertise it will seek from civilian experts. Software design and code writing could be among the skills that the Army wants in the experts it recruits.

“You have to look at what type of skill set are you looking for from private industry that you may not be producing internally in the Army,” she said.

The Army also will have to determine whether there is a desire in the private sector to serve in the military, Frost said.

McGee said he was confident such an appetite does exist, even if such experts could make more money in the private sector.

That desire is largely driven by aspirations to contribute to the defense of the country and by “the sense of accomplishment” people can get from serving, he said.

“Sometimes the challenge becomes do they want to take their cyber skills they’ve spent a lifetime developing to make an app to make a car arrive at a corner more rapidly or do they want to shut down [Islamic State group] beheading videos,” McGee said. “We are finding there is a tremendous desire for that.”