50 years later, an Army widow met the Viet Cong soldier who was involved in her husband’s death

"It was a million to one shot  ... we would find this VC soldier, still alive, still in the same hamlet and willing to talk" 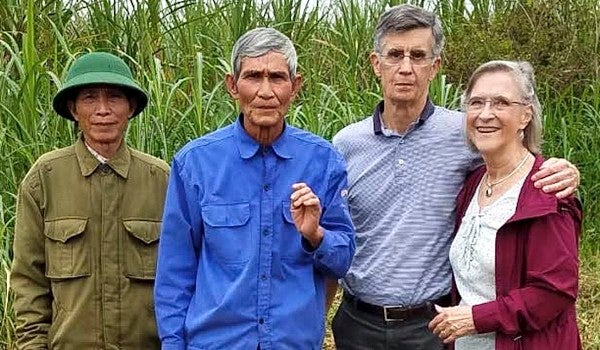 KALAMAZOO, Mich. — When Hattie and Jim Ford went to Vietnam in January, they hoped to learn more about the death of her first husband.

Lt. Deane Taylor Jr. was fatally shot by the Viet Cong after his Army helicopter crashed during the Vietnam War in 1969.

What the Fords never expected was to be standing face to face with one of the soldiers who had attacked Taylor.

The Vietnamese soldier, found after a circuitous search, brought them to the spot where the attack had occurred exactly 50 years earlier.

It was as if the Fords had stepped into a time machine and were transported to one of the ugliest chapters in American history.

“It was a million to one shot,” he said. “We would find this VC soldier, still alive, still in the same hamlet and willing to talk.”

The former soldier didn't offer an apology, but the Fords weren't looking for one.

Hattie Ford was grateful. She said the man helped provide closure by filling in some of the gaps about what she had known about the death.

The encounter turned more poignant in April. A cancer Hattie had battled on and off for 13 years had returned. The prognosis isn't good. She received a bone marrow transplant in August that she hopes will extend her life beyond several months.

Besides Hattie's experience, the visit to Vietnam may have been even more emotional for Jim.

But Jim Ford returned from the war with vexing feelings, ones he couldn't quite pinpoint, ones that danced in his head for half of a century.

It wasn't until he revisited a recovering and forgiving Vietnam that he was able to shed that feeling of foreboding.

“The people couldn't be nicer or friendlier,” he said. “It was kind of cathartic.”

This 50-year saga began in January 1969 when Taylor, 22, was on a reconnaissance mission. He had been in Vietnam two months.

He flew a helicopter while two passengers searched for Viet Cong living among civilians in isolated villages, the military said.

It was an overcast day with a light fog and misty rain, so Taylor was forced to fly below the rain clouds.

When the Hughes OH-6 Cayuse passed over a clearing in a river valley, it was struck by fire from AK-47s, knocking out its engine, according to the military.

After the helicopter crashed, Taylor and the two passengers didn't flee. Hattie Ford wouldn't learn the reason until she visited Vietnam.

She was 22 when Taylor died. They had been married 18 months.

“We had just begun to lay a foundation for a life together,” she said. “I wanted more time.”

It was Jim's idea to visit Vietnam in January.

He wanted to see how much the country had changed since he fought there.

He also knew the 50th anniversary of Taylor's death was approaching, so he asked Hattie if she was interested in visiting the spot.

Jim found the location by reviewing an Army incident report and old military maps. He matched the former military coordinates with ones today, which showed the attack occurred just outside Thon Ba, a small remote village in central Vietnam.

He hoped someone in the village would be old enough to remember.

“Helicopters don't normally come crashing down,” he said. “Maybe it was the only time a helicopter was shot down in that area.”

After visiting other parts of Vietnam for three days, the Fords drove to Thon Ba with a travel guide.

They went home to home asking people if they remembered the helicopter crash. Residents provided tea but no memories. They eventually found a former Viet Cong soldier, who made several phone calls, got on a scooter and came back with a second soldier.

The second soldier, whose name wasn't known and was the same age as Hattie, took the couple to what looked like a sugarcane field just outside the village.

In a clearing along a winding river, he pointed to the ground, telling the Fords through the guide-interpreter this was the spot where Taylor died.

The former soldier, who was stationed at the village during the war, told the Fords the helicopter was returning to its base when it was struck by the gunfire. It had been flying low, at 2,000 feet, the soldier said.

After losing power, the Cayuse glided to the spot where the Fords stood. The soldier said one of the three Americans had broken their leg in the crash, which was probably why they had remained with the damaged aircraft instead of hiding in the woods.

The Viet Cong shot the American men, and the former soldier said he burned the helicopter. He said he wanted to steal Taylor's wedding ring but worried there wouldn't be enough time before the U.S. sent reinforcements.

The soldier said he wished he had taken the ring so he could now return it to the Fords. He didn't know the military had already collected it when it retrieved the bodies in 1969.

Hattie Ford wasn't sure how she would react to the visit and, afterwards, struggled to describe her feelings.

It was easier to explain how she didn't feel.

She said people expected her to be angry or resentful toward the Viet Cong. She felt neither.

If the roles had been reversed, Taylor would have surely killed the Vietnamese soldier, she said. Both men were just doing their job, as distasteful as it was.

If Hattie felt anger, she would direct it toward the U.S. government for getting us into the quagmire in the first place.

She also didn't feel grief or sorrow after the 11-day trip. What she felt was gratitude.

Grateful for a second husband who made a tribute to a first husband possible. Grateful for a former enemy who took the time to do the same.

If Hattie had one regret, it was she didn't ask the former soldier more questions. She didn't want to seem accusatory.

But she would like to know if the soldier had acted alone or with others; if there was a gunfight or the Americans had surrendered and been executed; if, in fact, the soldier had been the one who killed Taylor.

The travel guide, Thong Nguyen, of Audley Travel, said the encounter showed how much relations between the two countries have improved.

“They are building the strong bridge for understanding each other,” he told The Detroit News in an email. “The future is better. Foe is becoming friend.”

Jim Ford was an Air Force pilot who flew reconnaissance missions in Laos and Vietnam from 1972 to 1973.

The experience left him with an array of conflicting feelings: guilt, pride, disillusionment, gratitude, disgust.

“It's a jumble of emotions I'm sure I don't fully understand myself,” he said.

The Vietnam of his nightmares was a foreboding backwater, a nest of needless death and destruction on a grand scale, an evil without end.

But the January trip was a revelation.

The thatched huts of the war have given way to skyscrapers on white sand beaches. Rice paddies and steamy canals have been replaced with superhighways.

And the country seemed to harbor no ill will toward America. Ford knows because he asked many of the Vietnamese he met.

During breakfast at their hotel in Hoi An, Ford quizzed the waiter and learned his grandfather was a Viet Cong who had died in the war. His father had grown up without a dad.

Ford apologized but the waiter waved him off, saying all that was in the past. After the waiter left, Ford began to cry and couldn't stop.

“I never saw it coming,” he said about the flood of emotions. “I haven't done that since I was 10 years old.”

Ford hasn't had a single Vietnam nightmare since the trip.

This is Hattie Ford's third tussle with cancer.

She contracted lymphoma in 2006 that was slow-growing, incurable but controllable.

A more aggressive form returned in 2015 and was eradicated with chemotherapy. One side effect of chemo is it could cause secondary cancers.

After returning from Vietnam, Hattie received suspicious blood tests in February. A bone marrow biopsy revealed she had myelodysplastic syndrome, a cancer that prevents the making of blood cells.

The bone marrow transplant is the only treatment that can help. She has a 50-50 chance of recovering.

Hattie said she has an abiding faith and one-day-at-a-time attitude that keeps her in good stead.

“I accept the challenges that come my way,” she said.

In 1974, five years after Taylor died, Hattie was taking summer classes at the University of Georgia to receive a master's degree in math education.

Friends set her up on a blind date. They told her the guy, like Taylor, had been a pilot during the war.

Jim had returned from Vietnam and had just started attending law school at the university.

They were married a year later.

They moved to Kalamazoo where Jim became house counsel for The Upjohn Co. and then went into private practice. Hattie taught geometry in a local high school.

During 44 years of marriage, they have traveled the world and spent winters in Florida. They had three children and seven grandkids, with one more on the way.

Hattie said it's been one full of blessings and she's thankful for each and every one.

“I never dreamed of having the life we've had,” she said. “It's just been a very good life.”