The wife of an Army sergeant killed in December admitted that she planned his killing together with another man, communicating on Snapchat in an attempt to hide their communications, according to statements she made to police 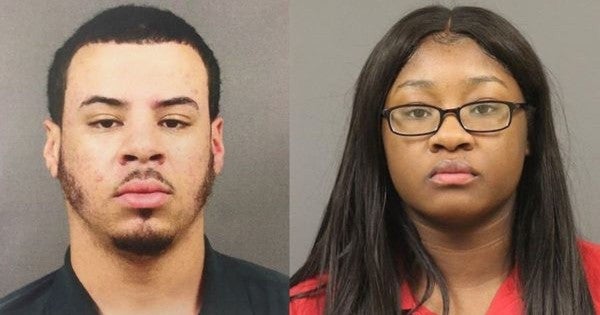 BERRIEN COUNTY, MI — The wife of an Army sergeant killed in December admitted that she planned his killing together with another man, communicating on Snapchat in an attempt to hide their communications, according to statements she made to police.

Hassel and co-defendant Jeremy Cuellar, 24, both pleaded not guilty to charges of first-degree, premeditated murder in the death of U.S. Army Sgt. Tyrone Hassel III, 23, on New Years Eve.

Both defendants are headed to trial after the case was bound over following a preliminary examination Wednesday. Judge Sterling R. Schrock presided over the hearing after the originally scheduled judge fell ill Wednesday morning.

The murder charges were filed against the pair after a police investigation revealed an an alleged affair and plot to kill Tyrone Hassel III. The defendants hoped to continue their relationship and reap financial benefits resulting from Hassel's death, according to a press release from the Berrien County Sheriff's office.

If convicted of first-degree, premeditated murder, Cuellar and Hassel could face a sentence of life in prison without the chance for parole.

Lanier told Chief Assistant Prosecutor Steve Pierangeli that when he arrived at the scene of the shooting late on Dec. 31, he found the victim on the ground outside and a truck in the driveway. Hassel had a gunshot wound to his head, Lanier said.

Lanier testified that Kemia Hassel admitted to planning the killing, calling it a “50/50 deal” with the co-defendant Cuellar. According to Lanier's testimony, Hassel said yes when questioned by police about whether she planned her husband's death, if the plan began months before, and whether money was a motivator for the murder.

Kemia Hassel admitted to a sexual relationship with Cuellar, Lanier testified, and told police that she would “lean on him” when she had issues at home with her husband. She told police she had been unhappy in her marriage but that divorce was not an option because then she would not get any life insurance money, Lanier testified.

Cuellar told Hassel he could “handle this,” Lanier testified.

Cuellar and Hassel began their plans while deployed in Korea between February and October of last year, Lanier testified.

Hassel told police she and Cuellar thought committing the crime on a military base would be more difficult, so they waited until they were on leave for the holidays, Lanier testified. The two communicated with each other over Snapchat, because they thought the app's temporary messages would be untraceable by police, he testified.

On the night of the alleged murder, the victim and his wife were staying with his father in St. Joseph Township while the two were home on military leave over the holiday season.

Hassell was at a family gathering in Benton Harbor Dec. 31, 2018, and returned to his father's home in St. Joseph Township at about 11 p.m. to bring his wife some food, police said in a news release. He was confronted there by “an assailant who shot and killed him,” the release said.

Cuellar's defense attorney, Edwin Johnson III, questioned whether witnesses placed his client at the scene of the crime. He also asked whether police had evidence that Hassel “demanded” that Cuellar kill her husband.

Johnson said police had “several suspects,” but stopped investigating them once they had found Cuellar.

“I'm not so certain they have the right guy,” he said.

Two other members of the Army were called as witnesses in Wednesday's hearing. The two witnesses testified to knowing of Cuellar and Hassel's extramarital relationship.

One witness said Cuellar told him his plan to kill Hassel's husband and confided in him afterward about doing “what he had to do,” the witness testified

Cuellar told the witness a $400,000 Army life insurance benefit was “a plus,” the witness testified.

The victim's father, Tyrone Hassel Jr., said after the hearing that he had learned more details about the planning of his son's death during the examination.

“It's hard to take it in without crying,” Hassel said.

His son was married in 2016. He thought his son and daughter-in-law had a great marriage, he said.

“Everybody deserves to be forgiven,” Hassel said. “But I just want to have a conversation about what was going through her head.”

His daughter-in-law stayed with him for about 12 days after his son's death, he said.

“We took her in as one of our own,” he said. “Looking back knowing that I cared for this person that was ultimately responsible for killing my son. I still can't wrap my head around it.”

The couple's young child, Hassel's grandchild, is now living with his maternal grandma in Georgia, he said.

Hassel and Cuellar's murder trial is scheduled to begin April 30. Bonds for both defendants were previously set at $2.5 million each, with a requirement for a GPS tether should either post bond.