A Scranton based toy-maker responded with a "Roger that." 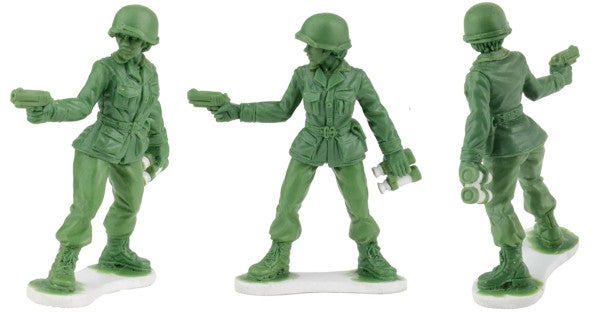 After 6-year-old Vivian Lord won fistfuls of tickets at the arcade while on her family vacation along Alabama's Gulf Coast this summer, she traded them in for one thing: as many of those little green Army men as she could. While she was playing with her new three-inch plastic figures, she left her mother speechless when she asked: “Why are there no girls?”

“She wanted me and my husband to Google it,” said Brittany Lord, Vivian's mother, “because if there were some, she wanted us to get some. We quickly found there weren't.”

So Vivian Lord, of Little Rock, Ark., sat down in their vacation condo and wrote a letter that her mother helped her send to a handful of U.S. toy-makers, asking: “Please can you make Army girls that look like women?”

A Scranton based toy-maker responded with a “Roger that.”

This week, ecommerce company BMC Toys announced it's developing a new platoon with four Army women that will be available by Christmas next year. Jeff Imel, who runs the business out of his Northeast Pennsylvania home, said he's been kicking around the idea of Army women for years, and first posted on his blog about it last summer after hearing from a retired Navy sailor who asked why they don't stock female toy soldiers.

But Imel specializes in manufacturing new toys from old molds — his newest is nearly 20 years old. Financing the design, sculpting and development of a brand new toy would cost “about the same as a modest new car,” he said, and Imel just wasn't sure the demand was there.

The argument against including women in the pack has long been that it wouldn't be historically accurate, as women weren't infantry soldiers in the mid-20th century, the era the toys generally reflect.

Things changed for Imel after he got the letter from Lord, which read in part: “Why do you not make girl Army men my friends mom is in the army to!!”

Now, he said, he's not trying to be “100 percent historically accurate. This is based upon who I'm making this for, which is kids.”

So far, Imel has commissioned a prototype of one female solider: a captain who's carrying a handgun and a pair of binoculars. Three others are also in the design phase, including a woman standing firing a rifle, a woman prone firing a rifle, and a woman kneeling with a bazooka. For now, someone who orders a 24-piece set would get four different poses in the mix.

Imel said kids tend to pick a favorite soldier that becomes the focus of their make-believe battle — and many see themselves in that favorite tiny figure.

“Certain kids will connect with this,” he said, “and it will help them be the hero of their story.”

Brittany Lord said while her daughter, who just started first grade, may not comprehend that “this is something she can tell her grandkids that she had a hand in,” Vivian's heard from other women in the military and seems to understand that they weren't being represented in the toys.

“There are little girls that really idolize women in the military, and there's no representation of them,” Brittany said. “Just because it's always been that way, doesn't mean it's right.”

For now, Vivian's told her mother she can't wait to get her pack of Army women next year.

And she may just get rid of all her men.