U.S. Army and British soldiers will participate in a force-on-force experiment next month to test out battlefield techs ranging from thermal-defeating woobies to exoskeleton knee braces 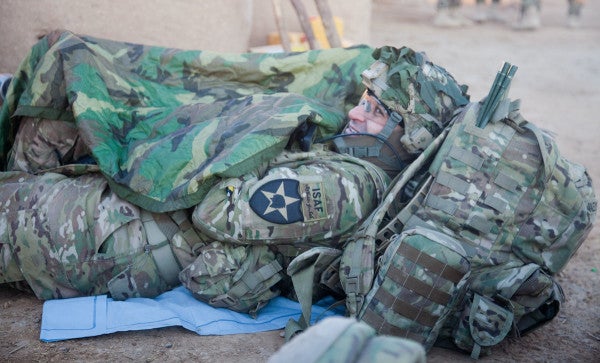 U.S. Army and British soldiers will participate in a force-on-force experiment next month to test out battlefield techs ranging from thermal-defeating woobies to exoskeleton knee braces.

The Maneuver Battle Lab at Fort Benning, Georgia, will host the Army Expeditionary Warrior Experiments (AEWE) 2020 from Feb. 4 to March 17. A platoon of British soldiers will join two platoons from Benning's Experimental Company to fight against an opposing force (OPFOR) made up of a platoon from the 4th Infantry Division in an effort to create a realistic environment for evaluating dozens of prototype technologies, such as unmanned aerial systems, communications gear and sophisticated sensors.

“All units, including the OPFOR, will have advanced capabilities, so what we are trying to replicate is not only what an opposing force might have now, but what they might have in the future,” Eddie Davis, director of the Maneuver Battle Lab, told Military.com. “It kind of levels the playing field because other armies are getting advanced to a certain degree, so we want to make sure we are fighting a challenging threat.”

One piece of kit soldiers will test is a thermal-signature defeating blanket similar to the beloved poncho liner or soldier “woobie.”

“That is kind of what intrigues us because we have looked at thermal-defeating blankets, as a loose term in the past, and they have worked, but they were very rigid, very difficult to carry,” Davis said.

“So this could potentially serve as similar thing you do with a poncho liner and also have thermal-defeating capability. That is interesting to us. It gives us the ability to hide ourselves from the thermal signature, which is pretty deadly,” he added.

The experiment will also evaluate unmanned aerial systems that have been modified to transport blood to forward areas for emergency medical treatment.

“To deliver blood on the battlefield — it's very sensitive to temperature … so this is just showing an application that says if you have a drone available that we could get whole blood to the forward edge of the battlefield,” Davis said, adding that Benning looked at a similar technology during last year's AEWE.

“Last year, we got three days where it kept it the temperature within the band of acceptability, so that is interesting,” he said.

Throughout the exercise, soldiers will also have a limited number of pneumatic exoskeleton braces, made by Roam Robotics, for the knee and ankle that are designed to increase performance and reduce fatigue while running, climbing or carrying heavy loads.

“We are making exoskeletons in a different way and, as opposed to the metals and motors that dominate traditional machines, we are making new devices that are primarily made out of fabrics and plastics,” according to a promotional video on the firm's website. “The concept is really simple — power is good and weight is bad. We can add more power for less weight than any machine we have seen to date.”

Davis said the Army routinely evaluates exoskeleton devices, and this is the first time Benning will test out the Roam Robotics technology.

“We are constantly evaluating systems to try to stay tuned to what industry has … to give us a sense of where technology might be,” he said.

Benning officials' plan is to brief senior leaders at the end of the experiment at a March Insights Day.

“The good thing about it is we report out at that event the things that we thought were significant,” Davis said.

The Maneuver Battle Lab will then compile a report designed to advise the Army on possible paths forward for some of the technology.

“Generally, we try to outline a path forward for that capability in terms of whether we are going to write a requirement for it … or are we going to recommend that it be picked up by a particular lab for further development,” Davis said.