Sgt. 1st Class Adam C. Herbst called the name of each soldier in his unit one last time. One-by-one, the... 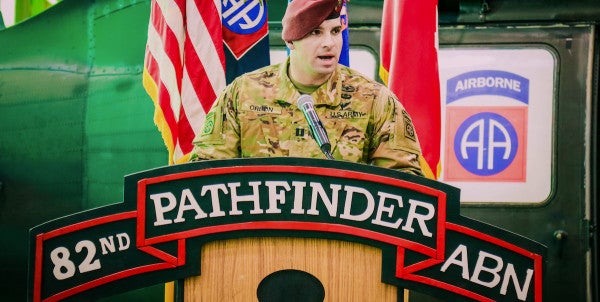 Sgt. 1st Class Adam C. Herbst called the name of each soldier in his unit one last time.

One-by-one, the soldiers broke formation in the hangar at Simmons Army Airfield until the Army's last pathfinder company was no more – leaving an empty space on the hangar floor.

“For many, today is a sad one,” Orbon said to an audience that included family, friends and veteran pathfinders whose service dated to 1957.

The deactivation was part of a larger Army transformation that saw other pathfinder units shutter last year and also marked the end of other small and specialized units known as long-range surveillance companies. But it won't end the pathfinder story, the captain said.

“It is simply the closing of a chapter,” Orbon said.

That's because no matter how advanced technology becomes, or how different the mission troops are called to perform, he said the military will need soldiers like those last pathfinders on display Friday afternoon at Fort Bragg.

“There will always be the need for those willing and courageous, for those to step forward and volunteer to be the first into danger and demand, by their honor, to be the last out of harm's way,” Orbon said.

Lt. Col. Travis L. McIntosh, commander of the 2nd Assault Helicopter Battalion, said the soldiers were among the best in the Army.

“They represent the front of the front lines,” he said, praising the soldiers for a successful deployment that ended last week with their return from Africa.

“This may very well be the finest and most talented, hand-picked infantry team within our conventional Army force,” McIntosh said.

The company included paratroopers as well as rangers, jumpmasters and experts in fast-rope insertions and extractions, he said. Among their ranks they counted expert rappellers, climbers, scuba divers, medics, snipers, switchblade operators and the 82nd Airborne combatives champion.

“This was the company that did it all,” McIntosh said.

Officials have said that while there will no longer be a pathfinder unit, the soldiers' unique skill sets will remain in the 82nd Airborne, embedded within the infantry battalions.

In deactivating the unit, officials also paid tribute to a long legacy of pathfinders, dating to World War II.

Norton's father, Lt. Gen. John Norton, was tasked by Lt. Gen. James Gavin – a wartime commander of the 82nd Airborne Division and one of the division's icons – with developing the doctrine and teaching three teams of pathfinders during the war.

As a captain, the elder Norton became one of the Army's first pathfinders.

Norton said leaders, including Gavin, recognized the need for the soldiers to help guide aircraft and mark drop zones.

The pathfinders served in World War II and later, proved their worth in other conflicts, leading the way for airborne parachute assaults, helicopter assaults and being tasked with recovering fallen troops.

Orbon, looking out among his soldiers one last time, asked the audience to envision themselves as a paratrooper crossing the English Channel, preparing to jump into Nazi-occupied France on D-Day. Or as a young soldier flying over the dense jungles and rice paddies of Vietnam in a Huey helicopter. Or as an aerial medical evacuation team banking through the valleys and around mountains in Afghanistan, on their way to the wreckage of a downed aircraft.

“Your heart would be beating out of your chest as you approach the threshold of battle. Your palms would be sweaty as you anticipate your encounter with the enemy. Your adrenaline would be high,” Orbon said.

Each of the scenarios would be humbling, he said. But none of the soldiers would be entering battle alone.

“Before many of those missions just described, there was another group of soldiers that went in ahead of everyone else,” Orbon said. “They marked those drop zones, clearing landing zones, secured those crash sites and recovered our lost heroes.”

Orbon said the legacy of the pathfinders will live on. And he said each of his soldiers lived up to that legacy and the enormous tasks asked of them.

“They are some of the best soldiers, citizens and men I will ever know,” he said.