"He is leaving a hole in our hearts that will be very hard to fill." 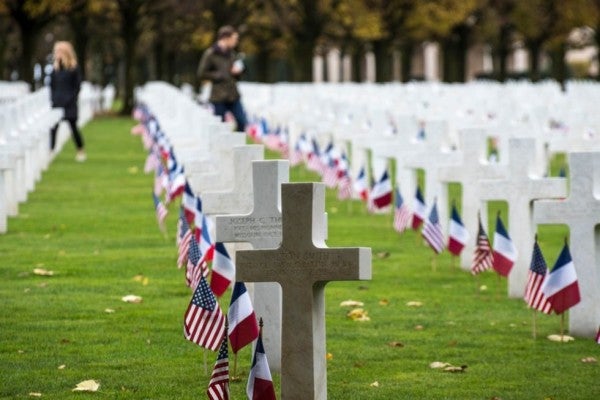 Crammed inside the small sanctuary of the West Congregational Church in Taunton, more than a hundred community members, first responders and military veterans of all branches stood before the coffin of a local World War II veteran to pay their respects and take the place of his departed family.

“I may not have known Arthur, but the outpouring of support for him here today speaks volumes to his character,” Taunton's Acting Mayor Donald Cleary said on Saturday morning.

Schroeder left behind no family, but Micaila Britto and Jeff Riccitelli, of the Raynham and Taunton Veteran's Departments, were intent on making sure his funeral did not have empty pews, so they reached out to groups across the city and state to ensure that the decorated veteran would be given the kind of send-off that he deserved.

“So many veterans organizations reached out and I'm so grateful that we're here to represent him as he goes on,” Britto said.

In the hour leading up to the start of the ceremony, dozens of service members filed down the narrow aisles to salute Schroeder's coffin, draped with an American flag, and offer their prayers for the departed soldier.

During the ceremony, The Rev. Ami Dion spoke of Schroeder's lasting impact on the community. Several people who knew him stood from their seats to recount their favorite memories to the substantial crowd.

“I've had the joy of being the pastor at West Congregational Church for over six years. During my time here I have been blessed to know many special people, and in a very tangible way this church feels like a family, and Arthur was a precious part of our family,” Dion said. “His death is very personal to me and to many in our congregation, and he is leaving a hole in our hearts that will be very hard to fill.”

According to Dion, Schroeder worked as a supply clerk and drove a tank during his time in the service, and in Taunton was a consistent churchgoer and an active participant with the Council on Aging.

“Arthur was a beloved member here and many of us are taking his death very hard,” Dion said. “He was such a constant presence that we never really considered what it would be like without him here.”

Following the service, local police and military veterans lined up side by side as Schroeder's coffin was brought out to a hearse, with the large crowd filing out into the bitter cold to say their final goodbyes.

“I was asked what Arthur would think about this outpouring of attention and appreciation for his life, and I think he would be astonished but he also would be thrilled. He loved people and he made friends so easily,” Dion said. “What can I say? He was a lovable guy.”