The United States Navy is testing a new system called the ATARI onboard the USS Abraham Lincoln that allows the Landing Signals... 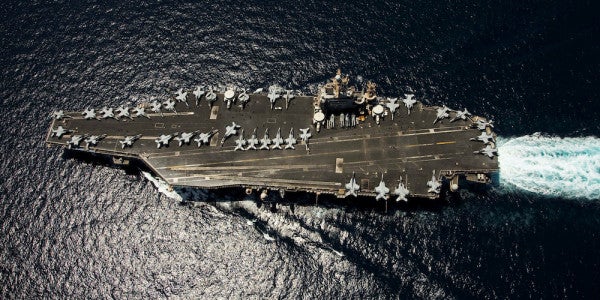 The United States Navy is testing a new system called the ATARI onboard the USS Abraham Lincoln that allows the Landing Signals Officer (LSO) to take control of an aircraft on approach to the carrier.

The Navy has been working on developing the aircraft terminal approach remote inceptor (ATARI), but the system was only tested at sea for the first time this March. Conditions at sea were challenging to say the least.

“I was really impressed with LSO's ability get me to touch down,” VX-23 test pilot Lt. John Marino, the first naval aviator to land using ATARI, said. “The conditions were really varsity, and it was really impressive the system worked the way it did. On a calm day, it would have been a little bit boring, but this was definitely more challenging.”

The Navy expects that ATARI could be used as a backup during contingencies to correct an aircraft’s glideslope from as far away as five miles. And while the system could be a useful backup for manned aircraft such a Boeing F/A-18 Super Hornet, ATARI might be especially useful for the day when unmanned aircraft start to operate from the flight deck.

“We don't have unmanned carrier-based vehicles in the fleet today, but they are coming soon,” Dan Shafer, a Naval Air Systems Command (NAVAIR) air vehicle engineer, said. “This is a potential alternative landing method and our system performed well.”

Indeed, unmanned aviation will arrive onboard the carrier in the coming years. After a long and troubled requirements development process that has had many fits and starts, the Navy has issued a request for proposal for the MQ-25 Stingray unmanned aerial refueling tanker. The MQ-25 could be a bridge towards a future air wing where unmanned aviation features heavily. Boeing, General Atomics, and Lockheed Martin are vying to win the contract.

Conditions at sea were especially rough during the tests onboard Lincoln, but LSOs are amongst the most experienced and capable naval aviators. “We took the guy who's flying the aircraft and we moved him to the LSO platform,” NAVAIR engineer Buddy Denham—creator of ATARI—said. “You're effectively using little joystick controllers to guide a 40,000 lbs. airplane, and it's almost like you're playing a video game.”

Despite the tough conditions, the ATARI performed well. “The deck was pitching significantly and yawing and rolling,” Denham said. “It was particularly difficult to land that day, and we showed it's possible to use this system even when the conditions aren't ideal.”

It will still take years of development before ATARI could be fielded to the fleet, but the system looks promising. Eventually, technology like ATARI or something similar could revolutionize naval aviation not just for manned aircraft but unmanned aviation as well. It really is just a matter of time.

This story originally appeared at The National Interest