No, a ‘child militia’ didn’t deploy to Atlanta amid nationwide protests

A trending video on Twitter claimed to show a "child militia" stationed outside at an Atlanta protest early Saturday, but police said the soldiers in the video are actually adult members of the Georgia National Guard 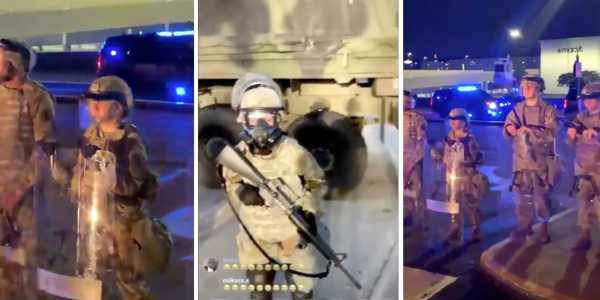 A trending video on Twitter claimed to show a “child militia” stationed outside at an Atlanta protest early Saturday, but police said the soldiers in the video are actually adult members of the Georgia National Guard.

“Atlanta has deployed a child militia at Lenox Mall fitted with riot shields and batons. What the actual f— is going on?,” the original tweet, which was shared by Atlanta-based band Fox Wound, said. The video has been viewed over nine million times since it was posted just after 2 a.m. Saturday and has been retweeted more than 101,000 times and liked over 187,000 likes.

When reached by Insider, a member of the band said they did not film the video, but had received it from a friend who was at the protest. The video depicts a group of armed soldiers standing not far from a Macy's store. The person recording zooms in on one particular soldier, who appears noticeably shorter than the rest.

Atlanta has deployed a child militia at Lenox Mall fitted with riot shields and batons. What the actual fuck is going on? pic.twitter.com/zTtmw5mDTN

The video led to a firestorm of angry tweets throughout Saturday, as outraged posters condemned the supposed “child militia.”

“Please share these videos of child soldiers a MILITIA MADE OF CHILDREN that came up in Atlanta Georgia protests yesterday. this is some hitler youth s— n we need to spread the word n find who is responsible,” one person tweeted.

Still, others expressed skepticism at the viral clip.

“Maybe I'm naive but I'm having a hard time buying that child militia video,” another said.

The man who said he filmed the video asked to remain anonymous but told Insider he recorded the clip around 1 a.m. on Saturday at Lenox Mall in Atlanta. Besides the comments he can be heard making on the video, he said he did not speak with the soldiers he filmed.

“It looked like they were in the National Guard and I was yelling some funny s— at them, but they didn't say anything. They were just standing there,” he said.

He told Insider he still believes the person in the video is a child, adding that the person “looked like such a baby.”

In spreading the video, he said hoped to raise support for the Atlanta Solidarity Fund, a group working to pay the bail of people who were arrested at protests in the city.

A spokesperson for the Atlanta Police Department told Insider Saturday that the video outside the Lenox Mall depicted “adult members of the Georgia National Guard.”

Adding fuel to fire was another popular video also claiming to depict more child soldiers at a protest. Though that video was filmed in Minneapolis, some Twitter users who shared the video said it originated in Atlanta.

“It appears the state of Georgia, or someone with access to uniforms and guns, has deployed child soldiers to confront protestors in Atlanta,” Chicago Alderman Carlos Ramirez-Rosa tweeted. The tweet has so far garnered 21,000 retweets and more than 37,000 likes.

SJ, also known as Instagram user “freebandz.sj,” who originally shared the video in a live broadcast on Instagram, told Insider the video was filmed in Minnesota and not in Georgia.

He said he saw what he believed to be “multiple” child soldiers surrounded by “mostly adult looking people.”

In statements to Insider, representatives of the Georgia and Minnesota National Guard said none of their members were under the age of 18.

“I can confirm that all of the activated members of the Minnesota National Guard are traditional, fully-trained Citizen-Soldiers and Airmen, with ages currently ranging from 18 to 63,” Blair Heusdens, a spokesperson for the National Guard in Minnesota, told Insider.