The Air Force on Tuesday was still investigating the Colorado Springs crash of an Air Force Thunderbirds jet and had... 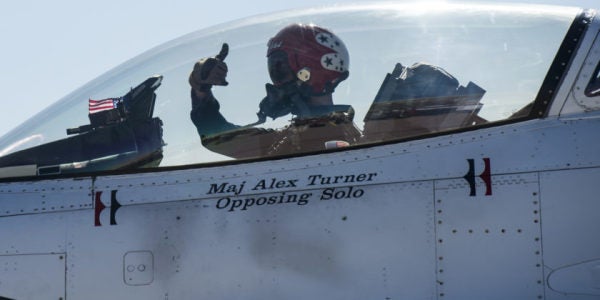 The Air Force on Tuesday was still investigating the Colorado Springs crash of an Air Force Thunderbirds jet and had no timeline for completion of the inquiry, a spokeswoman for Air Combat Command in Virginia said.

RELATED: Why the Air Force is paying big bonuses to some pilots and forcing others out »

The June 2 crash came after the Thunderbirds flying team put on a show over the Air Force Academy graduation ceremony. The jets were below 500 feet on their final approach to the airport when Thunderbird 6 pilot Maj. Alex Turner reported trouble.

“It suddenly cycled the engine off and on in the descent,” he told air traffic controllers.

Seconds later, Turner said he was aiming the plane into a field and ejecting.

“I'm putting it away from somebody's house here,” Turner said. “I'm getting out.”

Turner safely ejected from the stricken jet, which crashed in a field off Powers and Fontaine boulevards about a block away from a church and cluster of homes.

The indication of engine failure is the first hint at what went wrong with the plane.

The Air Force hasn't given any indication of what may have led to the crash and leaders say nothing will be released before the investigation is finished, as soon as next month.

F-16s like those flown by the Thunderbirds have proven prone to engine troubles over their decades of service.

If the F-16's single jet engine fails, pilots have seconds to find a place to safely ditch. Leaders have said Turner's actions to aim the plane into an open field saved lives.

Turner, an 11-year veteran of the Air Force, has logged more than 1,200 hours in the cockpit, including 270 in combat over Iraq and Libya, the Air Force said.

Turner walked away from the crash and was greeted minutes later by Air Force Academy graduation speaker President Barack Obama at the airport.

The flying team briefly was grounded after the crash, but returned to the air last month with Turner in a cockpit.

The wrecked jet was hauled to Peterson Air Force Base after the crash where it was meticulously disassembled to determine what caused the incident.