Tensions increased in central Texas overnight after the latest in a series of explosions that are being investigated as the... 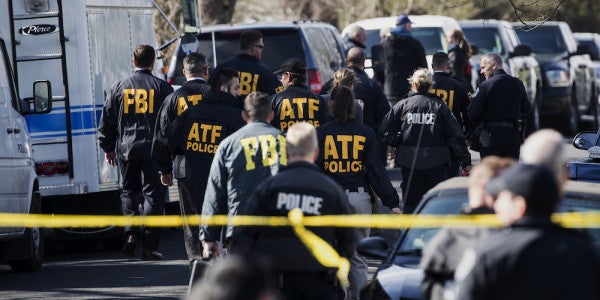 Tensions increased in central Texas overnight after the latest in a series of explosions that are being investigated as the work of a serial bomber.

A package believed to be bound for Austin exploded at a FedEx facility near San Antonio early Tuesday, authorities said, the fifth in a series of explosions this month surrounding the state capital that have killed two and injured four.

The latest explosion was reported shortly after midnight at the facility in Schertz, Texas, about 60 miles south of Austin. It was not immediately clear where the package was sent from, its destination or what type of device exploded. Investigators have said components of the previous four devices appear to be similar, linking the attacks.

Texas Attorney General Ken Paxton told Austin’s KXAN on Tuesday that a second package containing an explosive device was found by authorities at the Schertz facility, but that it had not detonated. He said the package that exploded had been mailed from Austin to an Austin address and that authorities were working to track the sender.

San Antonio Police Chief William McManus confirmed to News 4 San Antonio at the scene that a second package was found at the Schertz facility loaded with an explosive and safely removed from the building.

“The safety of the employees and the public has been and remains our principal focus,” Schertz Mayor Michael Carpenter said at a briefing with investigators outside the FedEx facility early Tuesday.

“A package had been traveling along the automated conveyor when it exploded,” Hansen said.

An employee standing near the conveyor was treated and released after later complaining of ringing in her ears, he said.

“We’re confident that neither this facility nor any in the Schertz area was a target,” of the bombing, he said.

FBI Assistant Special Agent in Charge James Smith would not say what the device was composed of, where the package originated or specifically where it was headed.

“We have no indications that there are threats to the public here in Schertz,” he stressed.

“We have agents from across the country, we have our national response team, we have K9 units here,” Ortega said. “We have been working round the clock — again, the public’s safety is our number-one priority and we are trying to find the person or persons responsible.”

A statement from FedEx said a “single package” exploded at the Schertz FedEx sorting facility and that the company was not providing any additional information.

ATF Special Agent Nicole Strong in Austin confirmed that the explosion in Schertz was being investigated as potentially part of the Austin series of bombings.

“It’s certainly a possibility. We’re not ruling it out. We’re all on the scene, FBI and ATF. There are no injuries and we’re still investigating,” Strong said Tuesday.

She said investigators were searching the scene and the device’s debris field for evidence. She wouldn’t say whether the device’s components were similar to those used in the previous blasts.

“It’s simply too early to tell,” she said.

Federal investigators have said the serial bombings are a national priority that have drawn 500 federal agents, support from national forensic labs in Quantico, Va., and the attention of the president.

“We are monitoring the situation, federal authorities are coordinating w/ local officials. We are committed to bringing perpetrators of these heinous acts to justice. There is no apparent nexus to terrorism at this time,” Sanders wrote.

Austin Police Chief Brian Manley told City Council members at a meeting early Tuesday that he could not confirm whether the package that exploded in Schertz had been mailed from one of several FedEx locations in Austin that authorities are now investigating.

“We will be looking very closely at where that package originated,” he said. “With what just occurred in Schertz, Texas, we’ve now brought in a new element where that device was being handled by a facility.”

He urged the public to remain vigilant, especially after Sunday’s attack, which involved a device set alongside a road and rigged to a tripwire that triggered the explosion.

“It’s not just limited to packages and boxes — it could be a backpack or bag,” Manley said.

He said investigators have been sending evidence to an ATF lab in Quantico which is reconstructing the devices to determine what type of explosive charges were used.

“I cannot sit here and tell you whether there will be another incident. Based on the information we have, there is no reason to believe there will not,” he said.

Council members praised police and fire officials’ response to the bombings, and offered any assistance needed.

“Godspeed on this. Find out who’s responsible and make it stop,” Mayor Steve Adler said.

Austin police were receiving scores of tips and combing through security camera footage from the scenes of previous explosions. Overnight, they responded to 420 reports of suspicious packages, including one at a FedEx facility south of Austin and another near the airport.

Police who responded to the facility south of Austin in the bedroom community of Sunset Valley released a statement on Facebook saying, “The FBI is currently investigating a confirmed link between packages involved in the Austin bombing investigation and a mail delivery office in Sunset Valley.”

“It appears that the source of the suspect packages was a private package delivery office in Sunset Valley,” the statement said. “At this time there are no known public safety threats.”

Authorities did not say what they were investigating at the FedEx facility at the airport.

Three of the previous explosive devices were hidden in packages delivered to homes in residential neighborhoods, but the fourth, which detonated late Sunday in southwest Austin, injuring two bicyclists, was triggered by a tripwire, showing what the police chief called “a higher level of sophistication.”

Manley said it wasn’t clear whether an individual or group committed the attacks. He has tried to reach out to whoever is responsible, asking for a dialogue to prevent further harm to residents. But hours after the Austin police made a public appeal in the case Sunday, increasing the reward for information to $115,000, the fourth explosion occurred. The motive for the attacks also remains unclear, Manley said.

Investigators had said the attacks might have been motivated by racial bias, since the previous explosions killed two African American men and wounded one of their mothers and a Latina woman.

But Sunday’s explosion injured white men bicycling through a wealthy neighborhood in southwest Austin, miles across town from the previous attacks.

Manley said the two latest victims, identified by a friend and relative as former high school classmates Will Grote, 22, and Colton Mathis, 23, were in stable condition.