"He never backed down from a challenge and he loved his Rangers so much." 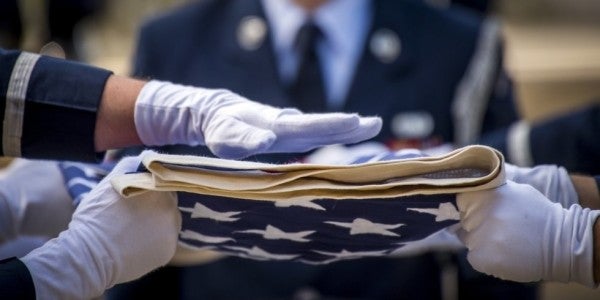 A little after 3 p.m. on Thursday a plane landed at Sarasota Bradenton International Airport. Passengers were asked to wait on board as a sign of respect while a service member's remains were unloaded.

Draped in an American flag, the casket carrying the remains of 20-year-old PFC Austin Stump, an Army Ranger and a 2017 graduate of Manatee High School, was rolled off the plane and into the waiting hands of an Army Honor Guard detail.

The casket was loaded onto a specialized church cart where Pam and John Stump, along with friends and family, gathered to welcome home their son before he was loaded onto a hearse and take away to the Covell Funeral Home in Bradenton.

It's not just the motto for the U.S. Army's elite Ranger battalions, it's a way of life and though Stump's journey was short, he led a life that best symbolized his Ranger motto.

His life — but not his memory — has ended.

SFC Denis Harris, casualty assistance officer in Tampa, said the Army could not discuss the circumstances surrounding Stump's death “at this time.”

Stationed at Fort Benning, Ga., Stump was scheduled for his first overseas deployment in December with the Third Ranger Battalion, 75th Infantry Regiment.

“He was doing what he was meant to do,” said his mother Pam Stump. “He was right where he was supposed to be. Austin was larger than life and he wanted to be in the military since he was 3 years old to follow in the footsteps of his grandfather and uncle. He was living his dream.”

“He was one of our super cadets,” said JROTC instructor, Command Sgt. Major Thomas Zoch. “He was the epitome of what cadets represent and stand for. He was a patriot. He had a heck of a future ahead of him.”

The Raider program is no easy task during high school where cadets undergo grueling physical training. It gets even harder for anyone looking to expand on those skills while serving in a combat-ready unit, especially elite units like the Rangers.

Stump completed basic, advanced individual training and airborne training and then went off to do what most men cannot, become an Army Ranger. He was attached to a mortar crew, and he had plans to complete another very difficult task by going to sniper school.

“He could shoot and he loved to blow stuff up,” said Pam Stump said as she took in the memory of her son with a much-needed laugh before struggling again through the tears.

“Oh God, he loved everything about the Rangers,” she told the Bradenton Herald on Thursday. “He had so much knowledge, like he was an old soul, but had so much respect like an older person. He wasn't like a lot of this generation. He was always polite and respectful. He was a hysterical kid and made friends everywhere he went.”

Few Rangers are willing to brag about it. It's just not the way the Ranger brotherhood operates for those who put duty, country and honor above all else.

“I was never allowed to tell anyone he was a Ranger,” his mother said. “I had a 'Ranger Mom' shirt and he used to joke, 'What, a park ranger?' He wasn't doing it for the accolades. He did it because he was supposed to. He was 100 percent patriot. He was fiercely devoted and always saw the upside.

“He never backed down from a challenge and he loved his Rangers so much,” she said.

Part of the Ranger creed sums it up best:

“I accept the fact that as a Ranger my country expects me to move further, faster and fight harder than any other soldier … Never shall I fail my comrades.”

Other Rangers reached out to the Bradenton Herald on Thursday. Former first Battalion Ranger Steve Schwab said Rangers “are men I still look up to today. They were some of the strongest, bravest and most ethical people I have ever known to this day. It was an honor to be a part of an elite group and the guys truly recognized what commitment and loyalty is.”

And so did Stump.

American flags donned the motorcycles of about a dozen Patriot Guard Riders who helped welcome home Stump on Thursday. Bill Franklin, ride captain, has participated in a number of funerals for soldiers and first responders, along with others who volunteer their time to honor the service of others.

Most of whom they have never met.

Stump is survived by his mother Pam and his father Lt. John Stump with West Manatee Fire and Rescue and several brothers and sisters.

Visitation is scheduled for 6-8 p.m. Sunday at Covell Funeral Home, 4232 26th St. W. A Celebration of Life is planned for Sept. 21 at The Bridge Church.

The family ask in lieu of flowers, people should donate to the Army Ranger Lead the Way Fund (leadthewayfund.org), which provides financial assistance to the families of Army Rangers who have died, become disabled or who are currently serving in harm's way around the world.