An Australian Army General Recalls The Smackdown That Saved His Career

The last time I saw Major General Day, I was an 18-year-old first-year cadet at the Australian Defence Force Academy... 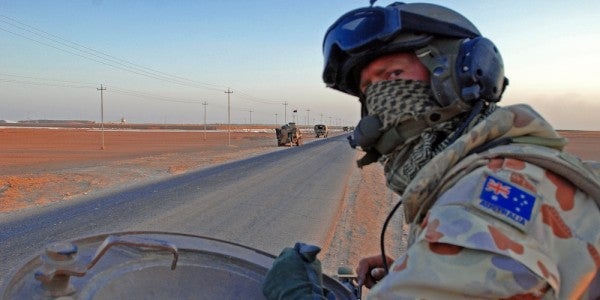 The last time I saw Major General Day, I was an 18-year-old first-year cadet at the Australian Defence Force Academy in Canberra. He was the Commandant. It was November 1987. And I was standing in front of his desk. Being kicked out of the Academy. And I owe him big time because it was a turning point in my life.

I arrived at the Academy in January 1987, thinking I was pretty hot stuff. I had been top of almost all my classes at high school, and received one of a limited number of scholarships for entry into the Academy.

I studied civil engineering. But I was a disaster. I was a young, immature kid from a country town who was totally overwhelmed by everything happening to me, and around me, at the Academy. So, at the end of the year, I had managed to fail every subject. It is probably still a record thirty years later.

But Major General Day saw something in me, some spark of potential that even now I don’t fully understand. His words after telling me I would be leaving the Academy were “…but I think you still might make a good Army officer, so I am sending you over the hill to the Royal Military College”—that is, the officer training school.

He gave me a second chance. And I like to think, after thirty years of serving my country at home and around the world, that I have made the most of that second chance.

This one decision by Major General Day taught me that failure did not have to be the end of something. It could be the start of a new journey. And one where I would be better informed about the realities of life and hardened me against the tough things we must sometimes face.

His decision taught me that failure is an opportunity to learn. Vince Lombardi once said that, “It’s not whether you get down, it’s whether you get back up.” Major General Day’s second chance taught me I could get back up. And every other time in the last three decades where I have tried and failed, I always knew that I would and could ‘get back up’. And as a Commander, I knew that when people failed, if given the chance they would always get back up as well.

Finally, he taught me the value of second chances. My failure was not due to some bad character trait. It was not malign. It was just something that everyone, on their journey through life, faces at some point. He taught me that giving others the benefit of the doubt could lead to wonderful things.

Of course, there are circumstances where this might not be possible. But, it is through second chances that we learn and grow. How many great people, that we look up to and admire, have been the beneficiary of a second chance at some point? By some miracle in November 1987, I received a second chance. So, I always look to give others a second chance.

So, thank you General Day. Until last night, I have not been able to tell you the impact of your decision thirty years ago. I hope I was able to adequately express my profound gratitude in person. Thank you for a second chance. I hope I have earned it.

Major General Mick Ryan is an Australian Army officer. A graduate of Johns Hopkins University School of Advanced International Studies, the US Marine Corps Command and Staff College, and School of Advanced Warfare, he is an avid reader and writer on military and national security topics, and is a passionate advocate of professional military education and lifelong learning. He currently commands the Australian Defence College in Canberra.