We salute the military spouse who got Disney’s CEO to send ‘Avengers: Endgame’ to deployed troops overseas

Most of those troops likely would have had to wait weeks, or months, to get back stateside to see the movie on the big screen 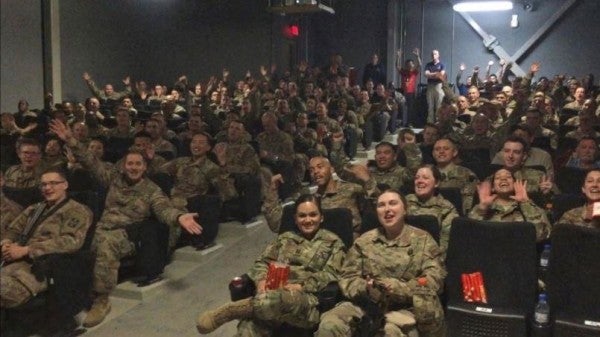 HURLBURT FIELD — The smiles say it all, shining through the darkness of a movie theater at Afghanistan's Bagram Airfield. Dozens of airmen, shown in an official photo, eagerly await the start of “Avengers: Endgame,” the culmination of nearly two dozen massively popular superhero movies in Marvel Studios' “Avengers” franchise.

The smiles, though, came courtesy of another kind of hero — Kat Lancaster, a Hurlburt Field military spouse whose heartfelt Twitter plea prompted the chairman and CEO of the Walt Disney Company, parent of Marvel Studios, to get “Avengers: Endgame” to troops in Afghanistan and Qatar within a couple of days of its opening weekend.

Without Lancaster's intervention, most of those troops likely would have had to wait weeks, or months, to get back stateside to see the movie on the big screen.

The story began with an April 27 tweet from Disney Chairman and CEO Robert Iger, the day after the opening weekend for “Avengers: Endgame” topped $1 billion.

“To all who have seen @Avengers Endgame, thank you. We appreciate your support,” Iger tweeted. “To all those who haven't, I highly recommend it … but then again, that's a bit of a shameless plug!”

Lancaster, a longtime Disney fan — she's visited Disney World frequently ever since she was 3 years old — responded to Iger from her Twitter account @KatAtDisney.

“Hey Bob,” she wrote, “any chance you could get Endgame to the troops deployed overseas sooner than later? I know Al Udeid and Bagram both have theaters and our folks in uniform could use a morale boost!”

Within a couple of hours, Iger confirmed the movie would be going to Bagram Air Base in Afghanistan and Al Udeid Air Base in Qatar.

“We're going to get @Avengers Endgame to Al Udeid and Bagram next week!” Iger posted. “Thanks @KatAtDisney for suggesting this! @WaltDisneyCo honors, appreciates & respects our American men & women in the military!”

Lancaster had used Twitter on a couple of previous occasions to try to get Iger's attention, mostly suggesting ways to improve the Disney World experience. She was surprised at Iger's response to her plea for “Avengers: Endgame.”

“You never expect (that from) anyone in that kind of position,” Lancaster said Friday from Eglin Air Force Base, where she's waiting for her husband, Air Force Maj. Joshua-Lee Lancaster, to return from a Middle East deployment.

Soon enough, though, she responded to Iger, tweeting “I'm overwhelmed by this gesture and my heart is full. So often our deployed members are left out of cultural moments while they risk their lives for us. This gift from the @WaltDisneyCo is sure to bring sheer joy and a small moment of escape from the realities of war. Thank you.”

Lancaster, Hurlburt Field's 2018 Spouse of the Year, also is the Air Force representative to the Military Spouse Advocacy Network, a nonprofit group of mentors, advocates and volunteers who work to build connections among military spouses. It was there, she said, that she realized how much of a cultural touchstone “Avengers: Endgame” was going to be, and how important it might be to get the movie to deployed troops.

“We talk about some really heavy subjects,” Lancaster said Friday, “But last week, it was all about this movie.”

Lancaster, who works as a nurse in a substance abuse detoxification facility, said she views the world through a lens focused on mental health. It was no different with getting “Avengers: Endgame” to troops on deployment, she said, to give them a sense of connection to the wider world.

“Whatever little piece of morale we can provide, let's get them what we can,” she said.

“My hubby is so excited …,” wrote one spouse. “He was so upset that his deployment would keep him from seeing it.”

One of the troops who saw the movie also wrote Lancaster, saying, “Thank you for making the suggestion to Mr. Iger because it worked. I watched it last night and it was fantastic! It will be the talk around the base for weeks and months to come … .”

Lancaster and her husband are huge fans of the “Avengers” franchise, and own all of the movies in the series. She wants to see “Avengers: Endgame” with him, but she won't be disappointed if he gets a chance to see it before he comes home.