What started out as a simple act of kindness to honor a police officer who recently passed away has caused... 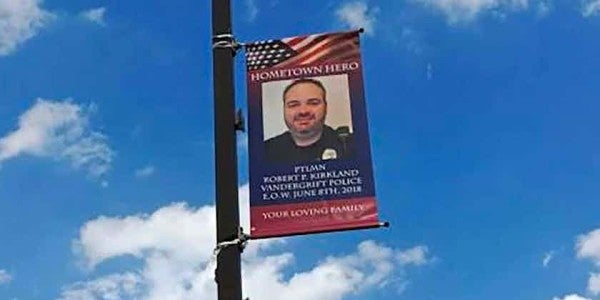 What started out as a simple act of kindness to honor a police officer who recently passed away has caused quite a stir in Vandergrift, Pennsylvania, after borough council voted to have a banner with his image taken down.

“As far as I’m concerned, it’s an insult to veterans to have anyone up there besides veterans,” said Rametta. “If they wanted to honor first responders, there’s another way they could do it.”

Kirkland died in June from complications from sepsis, and the banner was placed on a utility pole outside the police department.

The banner program, started in fall 2016 with the first banners going up Memorial Day 2017, is sponsored by Vandergrift Fire Department No. 1. Fire department officials said they never specified the program was intended only to recognize veterans.

The banner was installed in August as a surprise for Kirkland’s wife, Vicki, and their two sons, Connor, 13, and Cooper, 10.

Kirkland said finding out the banner will be taken down has added to the pain her family is experiencing.

“There’s a grieving family behind that (banner),” she said. “It represents somebody.”

Kirkland said the hardest part is seeing her two sons worry about her and their confusion over why the banner is going to be taken down.

“They’ve always been so proud of him for being a police officer,” Kirkland said. “That’s what they have left — they have a picture of their dad in a police uniform hanging at the police station.”

Kirkland said she wishes council would have reached out to her ahead of the decision to at least give her a heads up.

“It hasn’t even been three months. We’re still grieving,” she said. “Why in the world do I have to fight over a banner?”

Kirkland wasn’t the only one caught off guard by council’s decision.

“I’m still in shock,” said Ashleigh Hannigan, founder of the program and a firefighter. “This whole thing has gotten so twisted, and it breaks my heart. I hardly got any sleep because of this.”

Hannigan said she put up the money to have the banner made in honor of Kirkland.

Chvala said council was “blindsided” by the banner and had no prior knowledge the fire department was expanding the program beyond veterans.

“There’s not one of us on there that doesn’t love or respect Bobby Kirkland or every EMS in this town,” she said. “It would have been nice (for the department) to approach the council.”

Hannigan said the only approval the fire department needed from council was permission to use the utility poles to hang the banners, which was granted in 2016.

During Tuesday’s council meeting, council members said they had been approached by veterans as well as the local VFW and American Legion posts who were upset a non-veteran banner was being displayed.

But commanders at both organizations said they have nothing to do with the banners and they, personally, aren’t opposed to expanding the program to include first responders.

“I don’t have a problem with it at all,” said Gilbert Hanan, commander of American Legion Post 114. “The logo is Hometown Hero — who said they have to be military?”

Mike Reilly, president of Vandergrift Fire Department No. 1, is a veteran, and he said he didn’t anticipate council’s reaction.

“Honestly, the top of the banner does not say hometown military hero, it says hometown hero,” he said. “I can’t figure out what their big problem with this is.”

Local business owner Tim Turner, who owns The Working Man’s Garage, said taking down the banner is not the right decision.

“I think it’s a slap in the face to his family,” he said. “Council needs to make it right.”

It’s unclear when the banner might come down. Chvala said the borough wouldn’t be responsible for its removal because it’s not the municipality’s project. The banners are taken down each fall and stored for the winter.

Hannigan said she won’t be taking it down ahead of time and she hopes to reach an agreement with council to leave it up.

“I have not been personally contacted (by council),” she said. “I’m not taking it down until I’m reached out to and told, and then we’ll go from there. I’m really hoping I don’t have to take it down.”