Amid ongoing tensions with the U.S., North Korea has created special-operations forces “for the first time,” according to South Korea's... 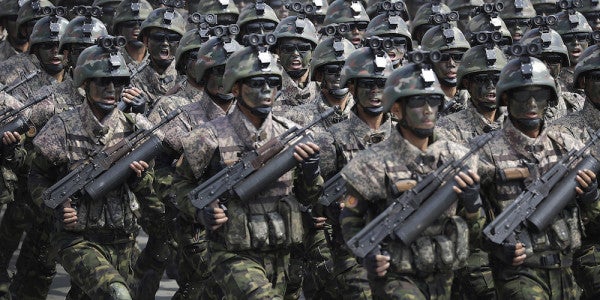 Amid ongoing tensions with the U.S., North Korea has created special-operations forces “for the first time,” according to South Korea's Yonhap News Agency.

Pyongyang announced the Korean People's Army special forces during a military parade over the weekend, which marked the anniversary of the 105th birthday of Kim Il Sung, who founded the country and is the grandfather of current leader Kim Jong Un.

The members of the new forces were reportedly shown marching in the parade, decked out in sunglasses and helmets with night-vision goggles.

Their faces were covered in black and camouflage paint, and they carried rifles with grenade launchers.

“Once Supreme Commander Kim Jong-Un issues an order, they will charge with resolve to thrust a sword through the enemy's heart like lighting over Mt. Paektu,” an announcer said during the parade broadcast, referring to the highest peak on the Korean Peninsula, according to Yonhap.

The forces' debut, and the parade itself, came just a few days before the start of US-South Korea joint military exercises, and analysts who spoke to Yonhap said the formation was related to the exercises — in particular a reported “decapitation attack” simulation to be performed by the U.S. Navy's SEAL Team 6, the unit that killed Osama bin Laden.

Kim Jong Un and North Korean officials give themselves a round of applause.Screen grab via YouTube

The Pentagon has told Business Insider that the US does not train for decapitation attacks of any kind but would not comment on whether SEAL Team 6 was in South Korea.

Those roughly 200,000 “special troops are primed to carry out combined operations such as attacks on major facilities in South Korea, the assassination of VIPs and harassment in the rear by infiltrating the South using underground tunnels.”

In a 2012 Vice interview, a purported South Korean-born NATO soldier detailed South Korean defense planning and said that North Korea had “something like 130,000 well-trained special forces” who would land on the South Korean coast to “promote general chaos” in should a conflict break out.

Tunnels from North Korea into South Korea have been found before, though none have been uncovered since 1990.

Photo taken in October 2015 shows North Korea's intermediate-range Musudan ballistic missiles displayed during a military parade. It was reported on May 31, 2016, that Pyongyang fired a missile, possibly a Musudan, but the launch appears to have failed.Photo via Associated Press

Recent tensions between Washington and Pyongyang have been focused on the latter's nuclear weapons program and missile testing.

Vice President Mike Pence, visiting the demilitarized zone on Monday, said the US had no more strategic patience with North Korea was considering military force against the regime. North Korean Vice Minister Han Song Ryol responded that if “the US is planning a military attack against us, we will react with a nuclear pre-emptive strike by our own style and method.”

The U.S. has also considered shooting down future North Korean missile tests, according to The Guardian, though experts and former officials warned that such a move risked sparking escalation that the US may not be able to control.

U.S. military officials indicated earlier this month that the aircraft carrier USS Carl Vinson and its support group would sail toward the Korean Peninsula in response to rising tensions and reports of a looming North Korea missile test.

However, on April 15, the carrier was pictured passing through Indonesia toward the Indian Ocean — about 3,500 miles from Korea. The ships are currently operating in the Indian Ocean, conducting exercises with Australian naval forces, according to Defense News.