The full investigation is expected to take a year to 18 months. 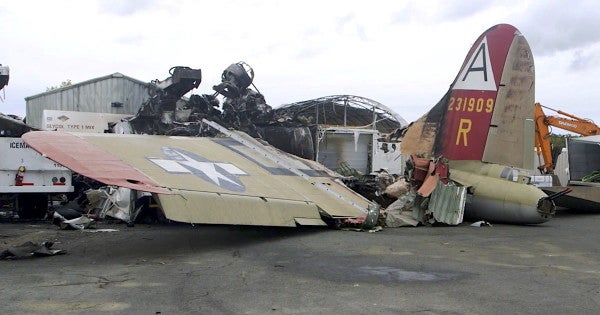 The National Transportation Safety Board released its preliminary report into the fatal crash of a B-17 bomber crash in Connecticut earlier this month.

Shortly after takeoff at 9:50 a.m. on Wednesday, Oct. 2, the pilot of the vintage WWII-era plane signaled to air traffic control at Bradley International Airport that he sought to land.

The pilot said he had a “rough mag” on the No. 4 engine, which indicates an issue with one of the bomber's four engines.

The landing for another flight was canceled to allow the vintage plane an immediate landing on runway 6. Prior to touching down, the plane hit approach lights about 1,000 feet prior to the runway, then landed 500 feet before reaching it, according to airport surveillance video and witness statements collected by federal investigators. The plane then veered off the runway before colliding into a deicing fluid tank and vehicles.

“The wreckage came to rest upright and the majority of the cabin, cockpit, and right wing were consumed by post-impact fire,” NTSB investigators said in their report.

A pair of the plane's engines remained partially attached to the left wing of the plane. This section traveled about 700 feet before coming to rest near a building at the airport.

The plane erupted into a fiery scene with plumes of smoke filling the airspace above it. Smoke could be seen across the Massachusetts state line from downtown Springfield.

The National Transportation Safety Board sent a team of 10 people to Bradley International Airport investigating the crash. The full investigation is expected to take a year to 18 months.

There were 13 people on board at the time of the crash, including 10 passengers. Seven people, including two pilots, were killed in the crash.

The flight mechanic and four passengers were seriously injured, while one passenger and one person on the ground incurred minor injuries.

Ernest McCauley, a 75-year-old from Long Beach, Calif. was the pilot of the flight. He had 14,500 hours of flight experience and held a commercial pilot certificate with ratings for airplane single-engine land, airplane multiengine land, instrument airplane, and held a type rating for the B-17.

He told the Spokesman-Review in Spokane, Washington in July, that he grew up near an airport begging pilots to give him a ride.

“I fly this thing every single day,” McCauley said with a smile, the paper reported.

Michael Foster was the co-pilot of the B-17 bomber. He was 71 years old and was from Jacksonville, Florida and had 22,000 hours of flight experience. He held an airline transport pilot certificate with ratings for airplane single-engine land, airplane multiengine land, and instrument airplane, with type ratings for B-737, B-757, B-767, DC-10 and LR-Jet.

The plane belonged to the Collings Foundation, a non-profit based in Stow that maintains a large collection of airplanes, automobiles and tanks. The aircraft was at Bradley as part of the “Wings of Freedom” tour, among three bombers and two World War II fighter planes on display with flights available to the public.

The passengers were customers who had paid for a chance to fly in the vintage aircraft.

“Our thoughts and prayers are with those who were on that flight and we will be forever grateful to the heroic efforts of the first responders at Bradley,” the Collings Foundation said in a statement following the crash.

The B-17 Flying Fortress first saw combat in 1941, flown by the British Royal Air Force, and its numbers grew as World War II intensified. It would become a major workhorse of the U.S. Army Air Corps, flying missions from bases in England to strike deep into the heart of Nazi Germany. As it evolved, its ability to carry more and more armaments grew, according to a history of the aircraft on the Boeing website.

Today, it is reported that fewer than 15 can still take to the air. And, as recently as earlier this year, nine of those were said to be in the U.S., including the one which crashed at Bradley.

The B-17 was the first aircraft assigned to Westover when the airbase was built in the early 1940s.

In 1946, a B-17 crash on Mount Tom killed 25 people, including Coast Guard and Air Corps servicemen returning home from duty in World War II. The crash occurred at about 10:20 p.m. on July 9, 1946, as the B-17, en route from Goosebay, Labrador, was circling in preparation to land at Westover.

It slammed into the southeastern slope of the mountain at about 900 feet elevation, just above the Mountain Park amusement park. The bomber burst into flames and began breaking apart as it slid along a boulder field before dropping into the ravine of the abandoned summit railway which had taken tourists up the mountain in the 19th century.