The U.S. sent six long-range strategic bombers flying across Europe and the Pacific last week in a coordinated show of force, U.S. Strategic Command said in a statement Monday 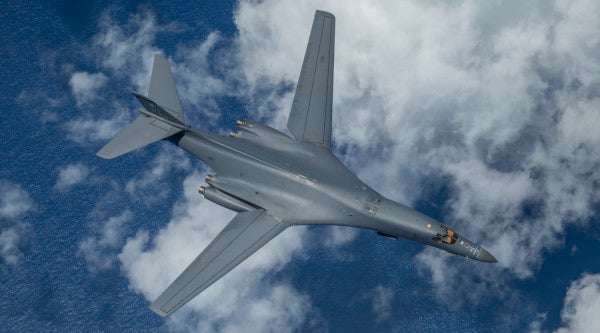 The U.S. sent six long-range strategic bombers flying across Europe and the Pacific last week in a coordinated show of force, U.S. Strategic Command said in a statement Monday.

STRATCOM, which is responsible for U.S. global strike capabilities, first mentioned the flights in a tweet Thursday, when the mission was conducted, and then additional details were provided on Monday.

Our strategic forces are always ready and can be anywhere, anytime. Right now, B-2 & B-52 #bombers are flying simultaneous missions across the globe, testing our strategic capabilities. #GlobalReach #CombatReadyForce pic.twitter.com/fYMb9Qif1p

The command explained that the “dynamic employment” of its long-range bombers and supporting aircraft “showcased the United States' ability to conduct synchronized strategic deterrence anywhere in the world with a ready, lethal force.”

In its statement Monday, STRATCOM made specific mention of COVID-19, stressing that the disease caused by the novel coronavirus has not hindered its ability to carry out the mission.

The U.S. military has made a point of highlighting its readiness as the virus continues to take its toll at home, with more than 1 million reported cases and more than 70,000 deaths in the US. The coronavirus has also spread among the military.

As of Monday, the Department of Defense has seen 5,316 coronavirus cases among its military personnel, with 2,218 recoveries so far.

On Sunday, Chief of Naval Operations Adm. Mike Gilday tweeted that the U.S. Navy currently has six aircraft carriers at sea, touting US carrier strength after COVID-19 knocked the USS Theodore Roosevelt, still at port in Guam, out for over a month.

Some of those carriers are not actually ready for deployment yet, but the message is clear. In a different tweet the day before, Gilday said “every forward-deployed submarine” in the Pacific is underway.

And, in addition to the B-2 and B-52 bomber flights conducted last Thursday, the U.S.v military has also had B-1B Lancer bombers operating in Europe and the Pacific lately.

Some of those bombers have conducted overflights in contested waterways like the South China Sea as Navy vessels have carried out freedom-of-navigation and presence operations.

In mid-April, amid concerns that some countries or actors might try to take advantage of the current situation to the detriment of U.S. interests, Secretary of Defense Mark Esper tweeted: “Adversaries who think now is the time to challenge the #USA: you're dangerously wrong.”

“This pandemic does not curtail our duty,” the secretary tweeted two days earlier. “From patrolling the high seas to escorting Russian bombers out of US airspace, our mission continues.”