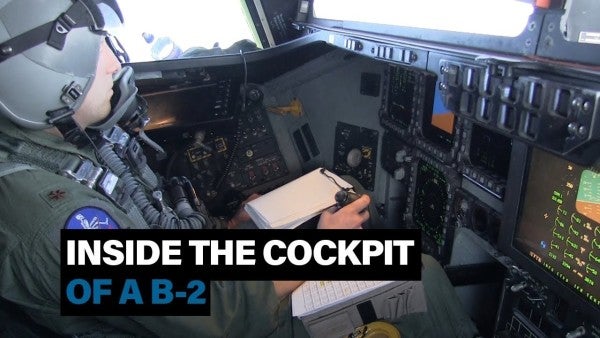 A new video offers a look at the inside of the B-2 Spirit bomber for the first time in the three-decade history of one of America's most secretive aerial weapons.

The U.S. Air Force allowed a civilian journalist to board a B-2 stealth bomber and record the flight from inside the cockpit, capturing exclusive footage of one of the service's most closely-guarded secrets.

The video was taken by documentary filmmaker Jeff Bolton aboard a B-2A with the 509th Bomb Wing out of Whiteman Air Force Base, Miss., the only operational base for the Spirits.

“In an era of rising tensions between global nuclear powers — the United States, China, Russia, and North Korea — this timely video of is a vivid reminder of the B-2's unique capabilities,” Bolton said in a statement. “No other stealth bombers are known to exist in the world.”

Another video from Bolton shows external footage of the B-2 refueling in flight, in addition to more shots from inside the cockpit.

The B-2 Spirit is a multi-role stealth bomber capable of penetrating sophisticated enemy defenses to strike targets with both conventional and nuclear payloads. The unmatched aircraft is a cornerstone of America's nuclear deterrence capabilities.

WATCH NEXT: A B-2 Readies To Bring The Pain To ISIS