Editor’s Note: This article by Oriana Pawlyk originally appeared on Military.com, a leading source of news for the military and veteran community. A commander... 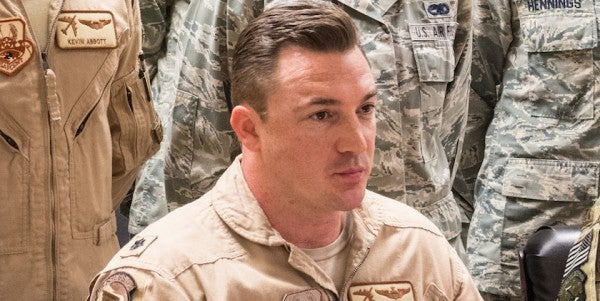 A commander of a B-52 Stratofortress squadron at Minot Air Force Base, North Dakota, was recently relieved from duty after sexually explicit and phallic drawings were discovered inside the bomber's cockpit screens during a recent deployment, Military.com has learned.

A command-directed investigation anticipated to be released by Air Force Global Strike Command in coming weeks will show that Lt. Col. Paul Goossen was removed from command of the 69th Bomb Squadron Nov. 27 because penis drawings were discovered on a moving map software displayed on the nuclear-capable B-52's Combat Network Communication Technology (CONECT), according to a source familiar with the incident.

The system, used to display common data such as pre-planned routes for sorties and target coordinates, captured the data for post-sortie debriefs. Screengrabs of the images were later used for laughs at an end-of-deployment party, sources said.

“Any actions or behavior that do not embody our values and principles are not tolerated within the Air Force,” said Air Force Global Strike spokesman Lt. Col. Uriah Orland in response to Military.com's request for comment.

Orland would not confirm the contents of the CDI, but added the zero-tolerance policy “includes creating or contributing to an unhealthy, inappropriate work environment.”

During the 69th's deployment to Al Udeid Air Force Base, Qatar, between September 2017 and April 2018, penis drawings were repeatedly created by members of the unit and were captured as screengrabs for a CD montage, the source said. The montage was played at the end of the deployment, and then left behind and later turned in to officials. The suggestive material prompted an investigation.

The Air Force on Nov. 27 said Goossen was removed “due to a loss of trust and confidence from his failure to maintain a professional workplace environment.”

Goossen took over as the squadron commander in summer 2017, Cherne said earlier this week.

Goossen was commander of the 69th Expeditionary Bomb Squadron when the B-52 flew its last missions against the Islamic State before the B-1B Lancer took over the mission in the Middle East, according to the Air Force.

During its eight-month deployment, Air Force units to include the 69th launched “834 consecutive B-52 missions without a maintenance cancellation,” while targeting ISIS and Taliban fighters across the U.S. Central Command region, the service said in a release.

Crews, including Goossen, even took part in a holiday conference call with President Donald Trump Dec. 24 while on station. Goossen was photographed speaking to the president during the conference call.

“Having the 69th Expeditionary Bomb Squadron be selected to receive a morale phone call from the President of the United States is a true Christmas gift and a real honor,” Goossen said of the phone call. “We feel fortunate to represent all Air Force deployed personnel and we are humbled to have the opportunity out of so many deserving units,” he said in the release.

Even though the 69th's drawings were restricted to the cockpit, the latest incident follows a spree of aerial maneuvers from various units over the last year throughout the military involving illustrated penises.

Most recently, two West Coast-based Marines under investigation for executing a flight pattern that resembled a phallus in late October have been restricted to ground duties, the Marine Corpssaid earlier this month.

It was suspected Air Force crews over Ramstein Air Base, Germany, attempted their own sky penis drawing in April.

Two Navy aviators piloting an EA-18G Growler last November over Washington state were also disciplined for their infamous incident that went viral across the internet.