Air Force deployments just keep getting shorter: B1 bombers that flew to Saudi Arabia last week are already back home 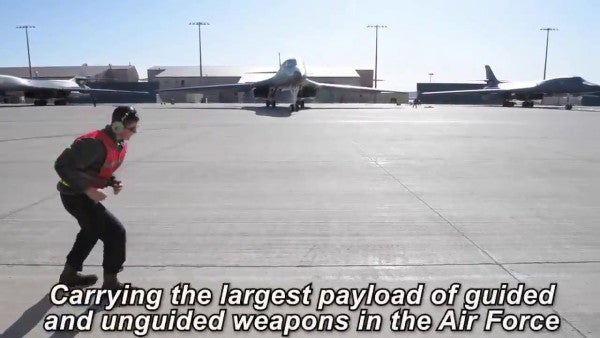 Multiple B-1B Lancers took off Thursday from Ellsworth Air Force Base near Rapid City and flew to Saudi Arabia, according to the Air Force.

The B-1s have since returned home. The deployment was intended to demonstrate an ability to rapidly deploy anywhere and anytime in the world, and to demonstrate lethal strike options for military commanders, according to a news release.

“This is what we train for, and is what sets us apart,” said Col. David A. Doss, 28th Bomb Wing commander at Ellsworth, in the release. “Let there be no doubt, our team and our B-1s always stand ready to answer our nation's call at a moment's notice.”

Support from KC-10 Extender and KC-135 Stratotanker aircraft assigned to Air Mobility Command and U.S. Air Forces in Europe and Africa was on hand to refuel the B-1s mid-flight.

The B-1s flew to Prince Sultan Air Base, Saudi Arabia. The Air Force did not disclose how many B-1s made the trip.

The timing of the B-1 deployment coincided with the U.S. government's development of crucial intelligence Thursday and subsequent lethal raid Saturday against Abu Bakr al-Baghdadi, the leader of the Islamic State group. The Air Force's news release about the B-1 deployment said nothing about the al-Baghdadi raid, and an Air Force spokesman did not immediately respond to a Journal question about whether the two events were connected.

In July, U.S. Sen. Mike Rounds, R-South Dakota, said only six of the nation's B-1 bombers were fully mission capable. He made the statement during a Senate Armed Services Committee confirmation hearing for Gen. John Hyten, who had been nominated for vice chairman of the Joint Chiefs of Staff.

According to information published by Boeing at the time, B-1s had flown more than 12,000 sorties since 2001 over Syria, Libya, Afghanistan and Iraq. The entire B-1 fleet was temporarily grounded in June 2018 and again in March of this year because of ejection-seat problems.

The nation's B-1 fleet is based at Ellsworth and at Dyess Air Force Base in Texas. The bombers, which date to the 1980s, can reach speeds beyond 900 mph, carry a payload of 75,000 pounds and tote 24 cruise missiles.

Rounds' office told the Journal in August that there were 62 B-1s in the U.S. fleet, including six that were fully mission-capable among the 45 split between Ellsworth and Dyess (21 at Ellsworth, and 24 at Dyess), plus 15 that were in depot at Tinker Air Force Base in Oklahoma and two test B-1s that were at Edwards Air Force Base in California.

The Air Force plans to eventually phase out B-1s with B-21 bombers, which are under development by Northrop Grumman and are planned to be sent first to Ellsworth, beginning sometime in the 2020s.