A U.S. B-52 bomber was sent near disputed islands in the South China Sea and another circumnavigated Japan, conducting joint military exercises with the Air Self-Defense Force, the U.S. Pacific Air Forces said Wednesday 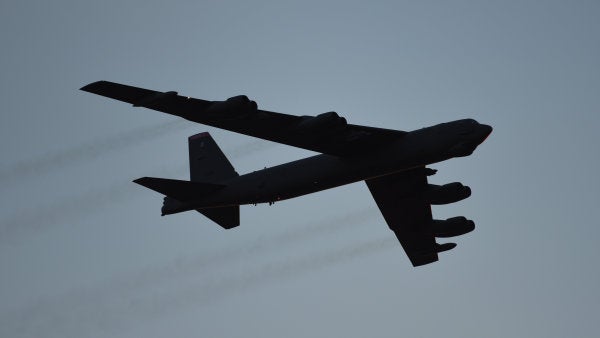 A U.S. B-52 bomber was sent near disputed islands in the South China Sea and another circumnavigated Japan, conducting joint military exercises with the Air Self-Defense Force, the U.S. Pacific Air Forces said Wednesday.

Monday's mission in the contested South China Sea was the first reported flight in the area by a B-52 since November.

The Pacific Air Forces (PACAF) said that the two B-52s had taken off from Andersen Air Force Base on the U.S. island territory of Guam, and participated in “routine training missions.”

Aircraft Spots, a Twitter account tracking movements of military aircraft, showed one B-52 as having flown near Scarborough Shoal, a disputed uninhabited reef that Beijing calls Huangyan Island.

The shoal, which is also claimed by Taipei and Manila and sits just 230 km (140 miles) from the Philippine coast, has long been a subject of speculation amid Beijing's massive land-reclamation projects in the South China Sea. Some experts believe China may seek to fortify the shoal as part of a bid to cement control of the strategic waterway.

The B-52 aircraft involved in the mission were part of the U.S. Air Force's “continuous bomber presence” based in Guam. Since 2004, the U.S. has rotated B-1, B-52 and B-2 long-range bombers out of Guam to conduct training missions in Asia.

Akin to the U.S. Navy's so-called freedom of navigation operations, in which it has sailed warships near disputed islands claimed by China in the South China Sea, the air force missions are intended to assert that the area is international airspace as well.

Beijing has built up a series of military outposts in the South China Sea, which includes vital sea lanes through which about $3 trillion in global trade passes each year.

China effectively seized Scarborough Shoal — a prime fishing spot — from the Philippines in 2012 after a tense standoff. In the wake of this, and a 2016 ruling by the Permanent Court of Arbitration that invalidated China's claim of sovereignty over much of the South China Sea, the coral outcrop has become synonymous with the regional power struggle in the waterway.

In January last year, the U.S. sent a guided-missile destroyer to within 12 nautical miles (22 km) of the shoal, stoking anger from China.

“Chinese Coast Guard vessels now fall under the command of the Central Military Commission and regularly harass and intimidate fishing vessels from our treaty ally, the Philippines, operating near Scarborough reef, as well as the fishing fleets of other regional nations,” Davidson said.

A separate posting by the Aircraft Spots Twitter account showed that the exercise took one of the bombers over the East China Sea and the Sea of Japan, with the aircraft flying around Japan.

The U.S. Air Force sent two B-52s over the East China Sea in January for “routine training” near Okinawa Prefecture.

The U.S. and Japanese forces regularly conduct exercises in the East China Sea — home to the Japanese-controlled Senkaku Islands — and Beijing, which also claims the islets and calls them the Diaoyu, often dispatches government ships and aircraft to the area surrounding them.

Training missions such as Monday's have appeared to gain more publicity amid protracted military and trade tensions between Washington and Beijing.

SEE ALSO: The Philippines Is Terrified The US Will Drag It Into A 'Shooting War' With China In The South China Sea

WATCH NEXT: The B-52 Joins The Fight Against ISIS