Early Wednesday morning, Army paratroopers were ordered to the Middle East on short notice in response to efforts by Iran-backed militia members to breach the U.S. Embassy in Baghdad. The deployment also served as the debut of a revamped crisis response capability 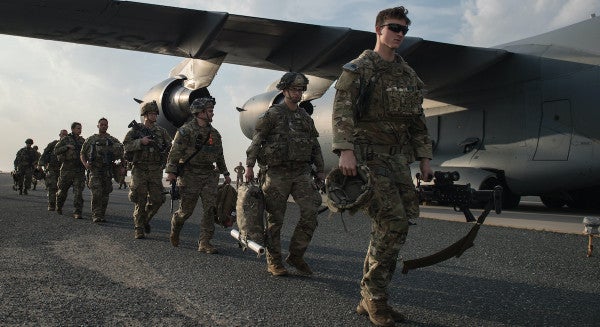 They were ordered to the Middle East on short notice in response to efforts by Iran-backed militia members to breach the U.S. Embassy in Baghdad. The deployment also served as the debut of a revamped crisis response capability.

“It's no longer the Global Response Force; the joint force has re-designated it as the IRF, the Immediate Response Force,” Burns said, saying nine years had passed since the rapid-deployment unit deployed paratroopers on a short-notice operation in 2010 to provide emergency relief to earthquake victims in Haiti.

The new IRF construct is designed to provide the 82nd and other XVIII Airborne Corps units with more enabler units for increased capabilities, Burns said.

“We are the hammer, but there are lots of other pieces that go to it,” Burns said. The majority are in the XVIII Airborne Corps, but there are some outside or the corps.”

Some of the Army paratroopers ordered to the Middle East on the snap deployment were on leave when they got the emergency call.

“We were on leave; we got alerted on the morning of New Year's Eve around 8:30 a.m.,” a senior noncommissioned officer in the 82nd said in pre-deployment video footage released from Fort Bragg.

“This was a snap thing,” the unnamed NCO said, snapping his fingers for effect. “It wasn't something that was pre-planned.”

“When you are in the chamber, so to speak, it's made very clear by your leadership that two-hour recall means two-hour recall. So … your phone needs to be on; you need to have a way for people to contact you,” Burns said.

The 82nd is required to keep one battalion of the ready brigade on alert to deploy within 18 hours after notification.

While the IRF may be new, the mission for the All Americans hasn't changed.

“I think it's hard to tell what is really going to happen because we've always got to be ready for the unexpected,” a young sergeant said with a hint of uncertainty in the pre-deployment video footage.

“I hope everybody comes back safely, and I hope we get the job done.”

Secretary of Defense Mark Esper announced Tuesday night that President Trump had ordered that 82nd battalion, as part of the unit's new Immediate Response Force, to the Central Command area after hundreds of Iranian-backed militia members and their supporters stormed the U.S. Embassy compound Tuesday morning.

The demonstrators began withdrawing from U.S. Embassy compound on Wednesday after the Popular Mobilization Forces, an umbrella group of state-allied militias, called for the end of the demonstrations.

Chairman of the Joint Chiefs of Staff Gen. Mark Milley said Thursday that, for now, the 2-504 paratroopers would be based in Kuwait but could conduct follow-on missions where needed.

It's unclear when the 82nd unit will return to Bragg. Esper told MSNBC today that “we will keep them there as long as necessary.”