Cellphones, Tablets, Fitbits Could Be Banned From Pentagon Under Mattis Review 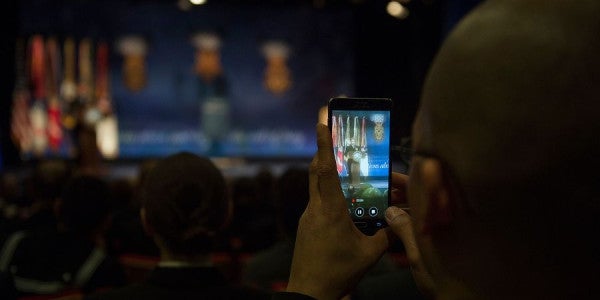 WASHINGTON — An ongoing review of policies governing the use of personal electronics at military sites around the world could lead to a ban on the use of non-government cellphones at the Pentagon, according to defense officials.

Defense Secretary Jim Mattis ordered the review to determine the implications personal electronic devices – ranging from small fitness trackers to smartphones and tablets – could have on the Defense Department’s security, according to officials who requested anonymity because they were not authorized to discuss the matter. Mattis has expressed concerns about recent incidents in which Defense Department workers brought their personal phones into areas restricted due to the presence of classified material, one official said Wednesday.

A Pentagon spokeswoman declined to confirm or deny that the ongoing review included considerations to ban personal phones inside the Pentagon – the Defense Department’s headquarters in Arlington, Va., where nearly 30,000 servicemembers, civilians and contractors work.

“We take threats to security seriously and are always looking into any potential additional measures to further enhance the security of our of Department of Defense personnel,” Army Maj. Audricia Harris said in a statement.

The White House banned its workers from carrying personal cellphones in the West Wing this month, citing security concerns. CNN reported those restrictions were the brainchild of White House Chief of Staff John Kelly, a retired four-star general who served alongside Mattis in the Marine Corps for decades.

Mattis had already ordered the review of electronic devices before a GPS tracking company published an online map of fitness tracker data last weekend that appeared to reveal locations and activities of American troops in war zones, the officials said. A probe into troops’ use of wearable fitness trackers, such as Fitbits, will be rolled into the existing review, they said.

Personal cellphones and other electronics are already banned in certain locations at military sites around the world, including all secure locations where classified information is handled. Military commanders, additionally, have the ability to ban cell phones from other locations, officials said.

The Pentagon includes dozens of secure rooms where personnel are restricted from bringing in their cellphones, which also do not receive service throughout much of the building.

One official said a thorough ban on personal cellular devices in the Pentagon would create logistical challenges and prove difficult to enforce. Those challenges would include the need to provide secure locations for all employees and visitors to store their devices while inside the building.