Van Plows Into Tourist-Heavy Crowds In Barcelona In Apparent Attack

Police officers in Barcelona, Spain, are looking for at least one suspect after a van crashed into a crowd of... 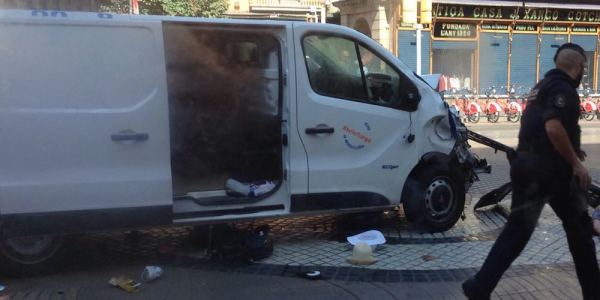 Police officers in Barcelona, Spain, are looking for at least one suspect after a van crashed into a crowd of pedestrians in a tourist-heavy district, leaving several people injured and some dead, multiple outlets are reporting.

It's unclear how many suspects the police have identified, but multiple outlets, citing the local police, are also reporting that two armed men have barricaded themselves in a bar near the site of the crash. Witnesses reported gunfire in the vicinity, though it's not immediately clear if the two incidents are related.

A second van linked to the attack was found in a small town outside of Barcelona, Reuters is reporting citing police sources. The van was rented as a getaway car for the attackers, local media is reporting.

RTVE, a Spanish public broadcaster, said that one suspect had been arrested, though police have not yet named the suspect.

The area around the crash is still on lockdown as police are searching door to door for the suspects.

The police said a white van mounted a sidewalk and struck several people on Plaza de Catalunya, a popular square in Barcelona. The Spanish-language newspaper El País said the driver of the van fled on foot after “mowing down” dozens of people. Police are still searching for the driver. The van was rented by a man named Driss Oukabir, local media is reporting.

Police have named Oukabir a suspect in the attack.

“All of a sudden, I just sort of heard a crashing noise and the whole street just started to run, screaming. I saw a woman right next to me screaming for her kids,” Aamer Anwar, who was walking on Las Ramblas, a pedestrian-heavy street near Plaza de Catalunya, at the time of the crash told Sky News. Other witnesses reported the van was “zig-zagging” along the street to hit as many people as possible.

“Police were very, very quickly there, police officers with guns, batons, everywhere,” Anwar said. “Then the whole street started getting pushed back.”

“Police officers who got there just started screaming at people to move back, move back,” Anwar added.

Another witness, Steven Turner, told the BBC that he saw “three or four people lying on the ground” after the van “rammed” into people.

“There are lots of ambulances and armed police with assault rifles around now,” Turner added.

Terrifying footage out of #Barcelona. Police warning people to stay away from the area around Placa Catalunya #LasRamblas pic.twitter.com/r6WBBmtklA

The White House has said that chief-of-staff John Kelly is aware of the situation, and is updating President Donald Trump. The U.S. Consulate is warning people to avoid the area.

“The United States condemns the terror attack in Barcelona, Spain, and will do whatever is necessary to help. Be tough & strong, we love you!” Trump tweeted.

Secretary of State Rex Tillerson said terrorists will be “brought to justice” at a press conference.

“Terrorists around the world should know — the United States and our allies are resolved to find you and bring you to justice,” Tillerson said, adding that U.S. nationals in Barcelona should check in with their families.

Spanish Prime Minister Mariano Rajoy Brey tweeted that he is “in touch with all authorities” and said the “priority is to attend to the wounded and facilitate the work of first responders and police.”

Catalan emergency services have asked to close public transportation in the area of the crash, and they are asking people to stay out of the area.

Vehicles have been used to crash into crowds in a number of ISIS-inspired terrorist attacks across Europe since July 2016, killing dozens of people in London, Nice, Stockholm, and Berlin. No group has taken responsibility for the attack as of yet.

The Spanish National Police have asked bystanders not to share photos of the crash out of respect for the victims, but some have still been spreading on social media.