Until now only active duty military, retirees, Medal of Honor recipients and veterans who were 100 percent disabled could shop on base 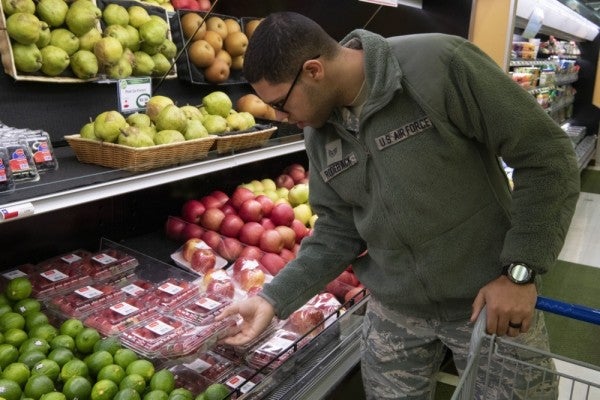 Starting New Year's Day, more than 3 million veterans nationwide, including tens of thousands of local veterans, will be able to shop at exchanges and commissaries on military bases and utilize their recreation facilities.

A new law makes veterans who are registered with the Veterans Affairs healthcare system and who have service-connected disabilities eligible to access those facilities on military bases. Purple Heart recipients and former POWs also will have shopping privileges and access.

In San Diego, almost 65,000 more veterans and caregivers are affected, the VA says.

Until now only active duty military, retirees, Medal of Honor recipients and veterans who were 100 percent disabled could shop on base, which is often less costly than regular shopping because on-base shoppers don't pay a sales tax.

The change is expected to boost sales at base grocery stores, shops and restaurants, which have suffered years of declines, in part because of online retail. Sales at commissaries across military bases are down almost 10 percent from 2016 to 2018, according to the latest numbers from the Defense Commissary Agency, which runs commissaries for all branches of the military.

Sales at San Diego area commissaries are down 6 percent over the same time frame.

Base exchanges, which are separate from commissaries and are managed by each branch of the military, have seen similar declines. Navy Exchange, for instance, reported nationwide sales dropped almost 8 percent from 2014 to 2018.

The Pentagon says in its fact sheet that the move to expand shopping privileges is to recognize the service of these veterans, not boost profits.

Called the “Purple Heart and Disabled Veterans Equal Access Act,” the law was included in the 2019 defense appropriations bill.

It gives authorized access to shop at base exchanges, commissaries and at Morale, Welfare and Recreation facilities such as restaurants, clubs, movie theaters, bowling alleys and golf courses.

Gyms and child care centers are not included, however.

Accessing local bases in 2020 won't be as simple as driving to the front gate and flashing a Veteran Health Identification Card.

Those cards — called VHICs — are issued to veterans enrolled in VA Healthcare. Any veteran with a card that includes the logo of their branch of service and the words “Purple Heart,” “Former POW” or “Service Connected” under their photo will have access to base facilities.

Those veterans must first visit a base's visitor control center and undergo a background check, according to the Pentagon's fact sheet on the new rules.

San Diego-area Navy bases are ready to accommodate returning veterans, according to Navy Region Southwest Spokesman Brian O'Rourke. Eligible veterans must first visit a local base visitor control center and fill out paperwork for a background check. That check can take up to 72 hours, he said.

“Once your background check is complete, and you're cleared, you'll be in the system for a finite amount of time,” he said. For San Diego, it's three years.

In addition to their VHICs, eligible veterans also must have a Real ID-compliant identification, such as a federally-compliant drivers license, passport or other federal ID.

For San Diego-area Navy bases only, eligible veterans without Real ID will be issued a separate card from the Defense Biometric Identification System, or “DBIDS.”

The Marine Corps is still finalizing some plans, they said, so it's unclear whether their base access systems at Miramar and Camp Pendleton would recognize veterans already enrolled at local Naval facilities.

It's not just veterans who'll be eligible to shop on base, their caregivers can, too.

Cynthia Butler, a spokeswoman for the San Diego VA Hospital, said the VA will mail eligibility letters that caregivers would need to bring to the base along with a picture I.D. that meets Real ID requirements.

Rubin Barcelona, store director for the Naval Base San Diego Commissary, said his staff is trained and ready to welcome these returning customers in 2020.

“The whole store went to training,” Barcelona said. “A lot of people have been calling and asking — I'm pretty sure it's going to be busy the first couple weeks. If you haven't been here lately, you'll be amazed at how the store operates.”

Veterans who do not otherwise meet the eligibility requirements of the new rules, but were honorably discharged, are able to shop at the exchange online.