In Battle For Mosul, Everybody’s Taking Selfies — And Some May Be Incriminating

With the offensive to reclaim the Iraqi city of Mosul now in its third month, smartphones are everywhere on the... 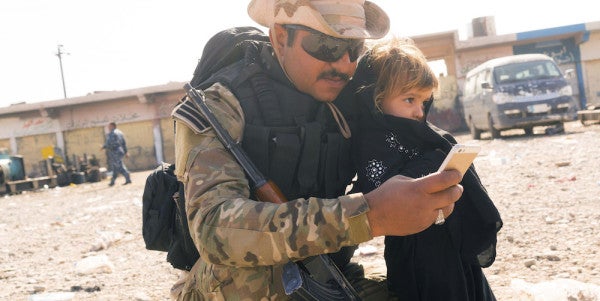 With the offensive to reclaim the Iraqi city of Mosul now in its third month, smartphones are everywhere on the battlefield, where the appetite for selfie photos is proving to be irresistible — and problematic.

Troops and commanders pose atop tanks, Humvees, checkpoints and even on the front lines with bullets flying. They snap pictures of themselves with a mix of generals, civilians, reporters, priests, doctors, babies and anything associated with the Islamic State, including flags, detainees and bodies.

They document themselves with reality-show glee clearing Islamic State tunnels, hoisting salvaged weapons, pointing to graffiti, prisoners and corpses. The photos are far from an official archive of events. But as questions arise about the Iraqi military’s treatment of detainees and the bodies of dead fighters, amateur images may become evidence.

Human Rights Watch has cited the amateur photos and videos in complaints about extrajudicial executions of prisoners and other abuses during the offensive.

The organization posted photos and video stills online in accusing Sunni militias and allied Iraqi Security Forces of dragging the bodies of at least five dead militants and executing at least one after he surrendered in Qayyarrah, about 40 miles south of Mosul, on Oct. 3. On video, a fighter could be seen stepping on the militant’s body and posed for a photo, the group said. A man in an Iraqi special forces uniform calls for a razor, saying he wants the head of the dead fighter.

“It never ceases to amaze me, nor stops disturbing me, that armed forces take pleasure in photographing themselves during or after committing an abuse. Over the last year, we were able to document the most serious abuses because of forces’ own photos,” said Belkis Wille, senior Iraq researcher at Human Rights Watch.

Last week, troops snapped selfies with the top U.S. and Iraqi commanders as the top brass arrived at an army post east of Mosul for an update on the offensive, which began Oct. 17. Among the most popular: Lt. Gen. Stephen Townsend, commander of U.S. forces in Iraq; Maj. Gen. Najim Jabouri, Iraqi commander of the Mosul offensive, and Lt. Gen. Abdul Wahab Saadi, Iraqi Special Forces commander, recognizable thanks to Facebook.

“I don’t have a Facebook account, but because of the selfies they are posting, I became like a hero,” Saadi said as he stood among the uniformed crowd. Many held cellphones aloft.

Saadi said the photos are good for morale, and help reassure families back home.

But they can be risky.

U.S. forces are allowed to take selfies in Iraq, as long as their commanders approve, but they may be restricted based on security classification, operational security, safety, or force protection, officials said.

Islamic State fighters monitor social media, and use it to identify and target commanders. Saadi showed video posted online by militants who recently shot at him in Mosul. The bullet lodged in a camera lens he keeps in his office.

He said Iraqi forces are advised not to take selfies in sensitive locations, including bases and areas where they’re fighting in Mosul, “so the enemy will not know our position.”

But judging from online posts, it’s a rule that’s rarely enforced. Soldiers post selfies daily from in and around Mosul, especially in recent weeks as the offensive slowed.

Many see the selfies as the digital continuation of a grand tradition.

Haval Mohamed is a Kurdish police special forces officer, grandson of a Peshmerga fighter whose photos he grew up admiring. They showed his grandfather armed, wearing a traditional red and white headdress and baggy pants, fighting then-President Saddam Hussein’s army to free the Kurdish north, now an autonomous region.

As Mohamed guarded a displaced persons camp last week, scrolled through photos of himself in front of sandbags on the front lines southeast of Mosul. Five soldiers in the photo were later killed in combat, he said.

Now Mohamed, 26, snaps selfies for his daughter, 4-year-old Hasti. Her wide-eyed pictures, complete with superimposed animal faces, are mixed with his. Mohamed said his daughter has seen him in uniform, but doesn’t understand the significance.

“One day if I die, she will know her dad was fighting for his land and will be proud of those photos,” Mohamed said.

In Shakoli, a village about 20 miles east of Mosul, Mohamed Garib, 27, showed off selfies taken with would-be Islamic State suicide bombers, who were fatally shot by his unit of Kurdish fighters before the extremists could detonate their explosive belts.

He wanted the photographs, he said, “To prove to people we had fierce and hard fighting” with the Islamic State and “to show people how dirty and criminal they were.”