President Donald Trump criticized governors for being weak amid continued nationwide unrest on a phone call Monday. During that call, Secretary of Defense Mark Esper urged state leaders to "dominate the battlespace," a reference to U.S. cities 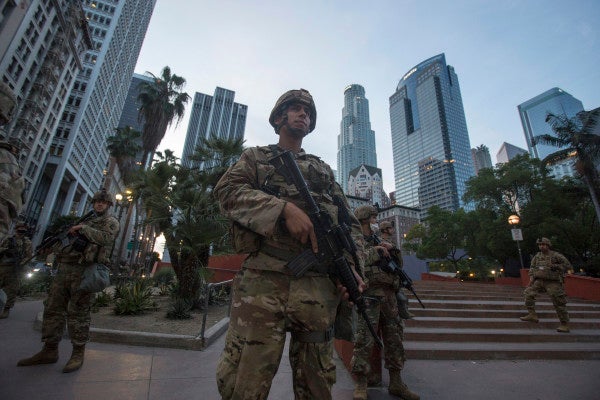 President Donald Trump criticized governors for being weak amid continued nationwide unrest on a phone call Monday. During that call, Secretary of Defense Mark Esper urged state leaders to “dominate the battlespace,” a reference to U.S. cities.

“The sooner that you mass and dominate the battlespace, the quicker this dissipates and we can get back to the right normal,” the secretary said, according to a recording leaked to The Washington Post.

“We need to dominate the battlespace,” Esper explained. “You have deep resources in the Guard. I stand ready. The chairman stands ready. The head of the National Guard stands ready to fully support you in helping mobilize the Guard.”

Esper's comments, which have drawn some criticism for characterizing US cities where people are protesting racism, injustice, and police brutality as a “battlespace,” come as the number of National Guard troops called up in response to protests, as well as acts of violence and destruction, has risen sharply.

As of Sunday morning, 5,000 National Guard soldiers and airmen were responding to civil unrest in 15 states and Washington DC. That number has since increased to more than 17,000 in 23 states and DC.

On the call with state leaders, Trump made similar comments, telling governors: “If you don't dominate, you're wasting your time. They're going to run over you. You are going to look like a bunch of jerks. You have to dominate.”

Trump also expressed frustration with governors that have been hesitant to use the National Guard. “I don't know what it is politically where you don't want to call out people,” he said. “They're ready, willing, and able. They want to fight for the country. I don't know what it is. Someday you'll have to explain it to me. But, it takes so long to call them up.”

Throughout the current situation, the president has repeatedly tried to present a tough stance, highlighting US military strength. Trump has also blamed the “radical left” for some of the unrest, and his political allies have done the same.

Sen. Tom Cotton, a Republican representing Arkansas, pushed the president to invoke the Insurrection Act of 1807 on Monday and send in the military.

“If local law enforcement is overwhelmed and needs backup, let's see how tough these Antifa terrorists are when they're facing off with the 101st Airborne Division,” he tweeted. In response, Trump said: “100% Correct. Thank you Tom!”

Some National Guard leaders have sent a different message.

“As a uniformed member of America's military, it breaks my heart to see the country I love in such pain. Your National Guard is here to help, and we will stay as long as we are needed,” Gen. Joseph Lengyel, National Guard Bureau chief, said Monday.

Maj. Gen. Thomas Carden, adjutant general of the Georgia National Guard, said the day before that “while we're always happy to go out and reinforce our local authorities, I believe that we in America should not get used to or accept uniformed service members, of any variety having to be put in a position where they are having to secure people inside the United States of America.”

“While we're glad to do it and honored to do it, this is a sign of the times that we need to do better as a country,” he said, adding that “we stand ready to do this mission anytime we're called on to do it, but I pray I never have to do it again.”

Four police officers were fired, and Chauvin has since been arrested and charged with third-degree murder and manslaughter. The charges against Chauvin followed days of protests.

While many protests, which have been ongoing in Minneapolis and cities across the country, have been peaceful, there have been widespread reports of violence, property damage, rioting, and looting — situations that have at times left law enforcement overwhelmed.

The National Guard said Sunday that its troops are available to “assist law enforcement authorities with protecting lives and property of citizens in their state,” adding that National Guard troops “live in the communities they serve and are there to protect their neighbor's right to protest peacefully.”