The tragedy that struck Beirut this week called into focus a danger potentially lurking in ports around the world, one that has more than once led to disaster 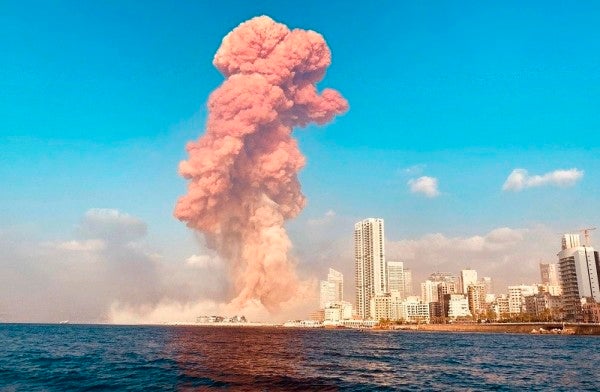 The tragedy that struck Beirut this week called into focus a danger potentially lurking in ports around the world, one that has more than once led to disaster.

A massive explosion at a port in the Lebanese capital on Tuesday caused extensive damage and destruction, killed at least 100 people, and injured thousands more.

The exact cause of the blast is unclear, but a focus of the investigation is a warehouse where roughly 2,750 tons of ammonium nitrate confiscated years earlier was improperly stored. A fire is suspected of igniting the stored material.

“Ammonium nitrate is a perfectly safe material,” Richard John Smythe, a chemist with extensive knowledge of explosive materials, told Insider. It's used in mining operations and fertilizer. But “if it is heated to the temperature of a wood fire, it will detonate,” he said, adding that “it's got an extreme punch for an explosive.”

It has happened before

What appears to have happened in Beirut has been seen in other port disasters. In August 2015, for instance, several explosions at the Port of Tianjin in China killed at least 173 people and injured nearly 800 others. The largest blast was caused by the detonation of 800 metric tons of ammonium nitrate.

And in 1947, a cargo ship carrying 2,100 metric tons of ammonium nitrate caught fire and exploded in the Port of Texas City, setting off additional fires and explosions that killed 581 people and injured many others.

While the U.S. has seen tragic ammonium nitrate explosions, experts told Insider that it is unlikely the U.S. would see a Beirut-style disaster now given regulations put in place after previous incidents.

Ammonium nitrate is regulated by the Bureau of Alcohol, Tobacco, Firearms and Explosives; the Department of Homeland Security; the Occupational Safety and Health Administration; and the Environmental Protection Agency.

Among the regulations, of particular importance are the Maritime Security Act, the Chemical Facility Anti-Terrorism Standards, and the Ammonium Nitrate Proposed Rule. The first guides maritime transfer, the second governs storage, and the third puts restrictions on sales.

What happened in Beirut “technically should be impossible in the U.S.,” Sim Tack, global security analyst for Stratfor, a Risk Assessment and Exchange company, told Insider, pointing not only to storage and quantity regulations and restrictions but also US requirements that ammonium nitrate be kept away from inhabited areas.

Unusual, but not impossible

Jimmie Oxley, an explosives expert at the University of Rhode Island, agreed, saying the risk is very low in the U.S. today.

“You will find it is very hard to buy ammonium nitrate in this country,” Oxley said.

In addition to requirements to report certain quantities of ammonium nitrate to federal agencies and regulations on proper storage, the US also has various restrictions on the sale and transfer of ammonium nitrate, which are strengthened by accepted know-your-customer practices among manufacturers.

If a U.S. port had to deal with the rather unusual situation that Beirut did and bring in a vessel carrying thousands of tons of ammonium nitrate, it “would still have to fulfill all requirements,” Tack said. Those requirements include providing suitable storage with adequate fire protection systems, among other things.

While taking those steps does not “entirely remove the risk if something goes wrong,” doing so “severely limits the potential” for disaster, Tack said.

The circumstances that brought the ammonium nitrate to Beirut reflect what Rockford Weitz, director of maritime studies at Tufts University's Fletcher School, called “the low end” of global shipping, with an aging vessel carrying a potentially dangerous cargo between two countries under the flag of a third country.

But Americans shouldn't worry that something similar might happen in the United States.

“Because it's been going through political turmoil and economic turmoil and a series of civil wars, Lebanon's regulatory agencies and coast guard and port authorities are like night and day from the United States,” Weitz added.

“I don't fear any of this stuff happening in the United States,” Weitz said. “It would happen only in a country that has an under-resourced and essentially … an incapable regulatory framework.”

Across the Middle East, where regulations are often not adequately enforced, materials like ammonium nitrate are transferred more easily and are commonly used to make improvised explosive devices.

Oxley and Tack said that what happened in Beirut is a lingering risk at unregulated ports in developing countries.

“The fact that it did not raise any questions among any of the people working at the port or authorities governing the port, the fact that they had nearly 3,000 tons of ammonium nitrate in bags in the back of an unsecured hanger, that would be insane in the U.S.” today, Tack said.