For six years, 2,750 tons of highly explosive ammonium nitrate that had been seized from an abandoned ship was held in Beirut's port, Lebanon's state media reported on Tuesday 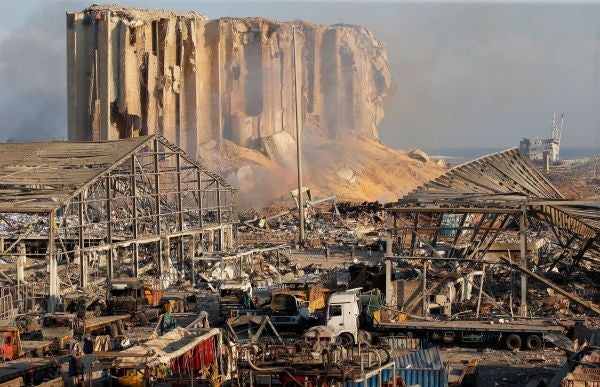 For six years, 2,750 tons of highly explosive ammonium nitrate that had been seized from an abandoned ship was held in Beirut's port, Lebanon's state media reported on Tuesday.

Officials at a meeting of Lebanon's Supreme Defense Council said that the stockpile of the chemical — often used in fertilizers — was behind the devastating explosion at the port on Tuesday, according to the national TV channel LBCI.

Business Insider has independently verified that a ship carrying the same cargo was abandoned in Beirut's port in late 2013. Business Insider was unable to find records about what became of the cargo in the years that followed.

After the blast on Tuesday, Lebanese Prime Minister Hassan Diab said it came from a “dangerous warehouse that has been there since 2014.”

The defense council identified the ship that brought the ammonium nitrate to Beirut as the MV Rhosus, LBCI reported.

A 2015 legal summary detailing a case handled by the Beirut law firm Baroudi & Associates described how the Rhosus' cargo came to be at the city's port.

The ship had been sailing from Georgia to Mozambique with ammonium nitrate in September 2013 when it had technical difficulties that forced it into the port at Beirut, the summary said.

After an inspection by Port State Control, an arm of the International Maritime Organization, the ship was forbidden from continuing its voyage.

“Shortly afterwards the vessel was abandoned by her owners after charterers and cargo concern lost interest in the cargo,” the Baroudi & Associates summary said.

Various creditors came forward, but “efforts to get in touch with the owners, charterers and cargo owners to obtain payment failed,” it said.

Baroudi & Associates said it took on a legal case to force authorities to let the ship's crew go home “given the 'dangerous' nature of the cargo.”

“Owing to the risks associated with retaining the ammonium nitrate on board the vessel, the port authorities discharged the cargo onto the port's warehouses,” the summary said.

The summary was published in 2015 by The Arrest News, a newsletter from a maritime-law network in Spain called Ship Arrested. Both the newsletter's editor and the law firm confirmed the account as being from Baroudi & Associates.

As of the summary's publication, the cargo and the ship remained in port.