This could be the Army’s next scout helicopter

Bell has unveiled its proposed single-rotor design for the U.S. Army's Future Attack Reconnaissance Aircraft (FARA), a cutting-edge helicopter that may be optionally manned 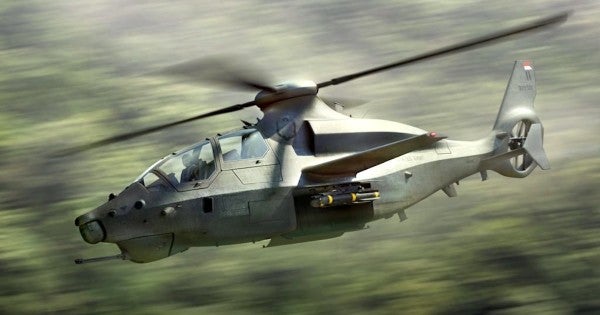 Editor's Note: This article by Oriana Pawly originally appeared on Military.com, a leading source of news for the military and veteran community.

Bell has unveiled its proposed single-rotor design for the U.S. Army's Future Attack Reconnaissance Aircraft (FARA), a cutting-edge helicopter that may be optionally manned.

The '360 Invictus' helicopter will be loaded with a 20 mm cannon and integrated munitions launcher able to carry Hellfire missiles or rockets. It will be able to adapt for future weapons integration in order to fight in urban environments, according to Bell.

Bell showcased its design to reporters at its facilities in Arlington, Virginia on Tuesday.

“The Army realized that they absolutely do need a smaller aircraft that's … able to operate in urban canyons as well as out in mixed terrain,” said Jeffrey Schloesser, executive vice president for strategic pursuits at Bell.

Schloesser said the 360 Invictus has high-cruise speeds, long-range capabilities and advanced maneuverability, all intended to help it dominate a future battlespace.

“We have a solution that can accomplish those missions, but it's also the lowest-risk, and therefore probably the lowest-cost aircraft, to be able to accomplish ,” Schloesser said.

Keith Flail, vice president of advanced vertical lift systems, said the agile helicopter's first flight is expected in the fall of 2022. It should be able to fly at speeds greater than 180 knots true airspeed, or more than 200 miles per hour; the aircraft will also have a supplemental power unit that can boost the aircraft's speed in flight.

Loosely based on Bell's 525 Relentless rotor system, the fly-by-wire computer flight control helicopter will be made in partnership with Collins Aerospace which will deliver a new avionics hardware and software suite. “[Collins] also has the ability to integrate capabilities with the MOSA, or modular open system architecture, onto the aircraft,” Flail said.

Some observers at Tuesday's event remarked how the streamlined, lightweight fuselage design of the 360 Invictus resembled the body of a shark, particularly the vertical canted ducted tail rotor, designed for optimized lift and propulsion.

In April, the Army awarded Bell, a subsidiary of Textron, the contract to begin prototype and design work; but the company must compete against four other firms before the service downselects its options to move forward with its future helicopter.

Currently, the Army is developing FARA and the Future Long Range Assault Aircraft (FLRAA) along with other airframes as part of its larger Future Vertical Lift initiative, or FVL.

FVL, the Army's third modernization priority, is intended to field a new generation of helicopters before 2030.

Flail said that Bell will have a full-scale model of its FARA design, which fits inside a C-17 Globemaster III for transport as well as a 40-foot CONEX box, at the annual Association of the U.S. Army show later this month.”