A harness-wearing whale that keeps head-butting ships in the Arctic Circle could be a Russian military asset, Norwegian scientists say 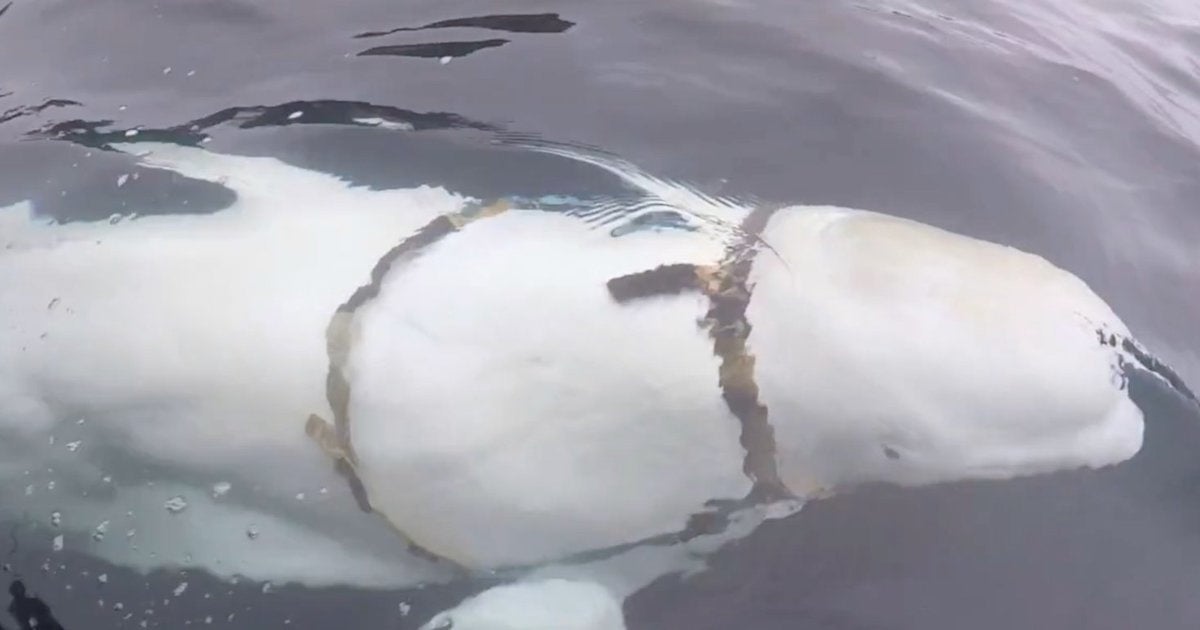 Scientists in Norway say that a harness-wearing beluga whale found harassing fishermen off the northern coast of Norway is likely a tool of the Russian military.

Experts from Norway's Institute of Marine Research intervened on Thursday after fisherman told them about the whale, which was head-butting their boats and gnawing nets off the island of Ingøya in the Arctic Circle.

The Institute's Martin Biuw told Norwegian broadcaster NRK: “If this whale comes from Russia — and there is great reason to believe it — then it is not Russian scientists, but rather the navy that has done this.”

Biuw said that civilian scientists would not attach harnesses to marine animals.

Experts from the Institute, along with Norwegian government officials, tempted the whale close with cod fillets, before taking off the harness. Images show it has the words “Equipment of St. Petersburg” written on it, in English.

Scientists said it has an attachment which could fit a GoPro camera, and was likely used to hold surveillance equipment like cameras or other marine sensors.

“We were going to put out nets when we saw a whale swimming between the boats,” Joar Hesten, the fisherman who reported the whale, told NRK.

“It came over to us, and as it approached, we saw that it had some sort of harness on it.”

The clasp on the harness said “Equipment St. Petersburg.”(VG)

Audun Rikardsen, from the Arctic University of Norway, told NRK: “We know that in Russia they have had domestic whales in captivity and also that some of these have apparently been released.

“Then they often seek out boats.”

Rikardsen said he checked with his Russian marine colleagues, who “tell me that it is most likely is the Russian navy in Murmansk.”

The location where scientists found the whale(Google Maps)

Heston also told Norwegian broadcaster VG that the whale was very tame, seemed like it wanted help, and bore clear signs of being trained by humans.

Read more:A Russian defense ministry report claims its elite soldiers can crash computers with their minds and read documents inside a safe after mastering telepathy from dolphins

Naval forces from the US, Russia, and Ukraine have used marine life as assets in the past, particularly dolphins.

The US used dolphins to locate underwater mines and submarines since the 1960s. There are currently 75 dolphins and sea lions housed by the US Navy's Marine Mammal Program in San Diego, California.

The whale swam off after the harness was removed(NRK)

In Russia, the dolphins are trained to find underwater mines. Russian state news outlet RIA Novosti once claimed the dolphins could kill enemy divers with knives and pistols attached to their heads.

Russia took control of some of Ukraine's military “combat dolphins” after the annexation of Crimea in 2014, state news outlet RIA Novosti said.

In 2016, Russia's Navy bought five bottle-nosed dolphins for $23,000, and in June 2017 TV Zvezda, owned by Russia's Defence Ministry, said that whales, seals, and dolphins were being trained for military operations.