The parents of two men killed in Benghazi, Libya nearly four years ago are suing former Secretary of State and... 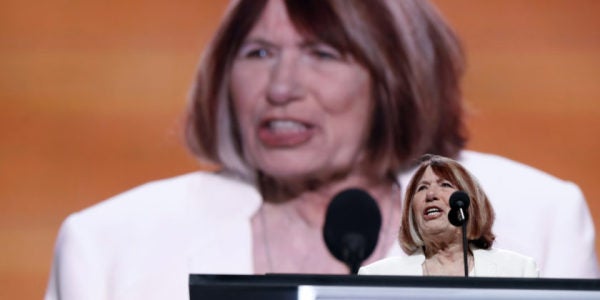 The parents of two men killed in Benghazi, Libya nearly four years ago are suing former Secretary of State and current presidential candidate Hillary Clinton, saying the attack resulted from her “reckless” handling of classified information.

Four people, including Smith and Woods, died after an anti-American militia group attacked the U.S. diplomatic compound on Sept. 11, 2012.

Since then, Clinton and the question of what responsibility she may have had for those deaths prompted a two-year inquiry that revealed she had used a private email server for government business.

A year-long FBI investigation followed, which found no grounds on which to prosecute her.

In their lawsuit, filed in the U.S. District Court for the District of Columbia, Smith’s mother and Woods’ father cite wrongful death, defamation and negligence among other legal claims against Clinton, who became the Democratic nominee for president less than two weeks ago.

Patricia Smith has been especially vocal in her criticism of Clinton and President Barack Obama, saying both are responsible for the killings.

“I blame Hillary Clinton personally for the death of my son,” Smith said during her speech last month at the Republican National Convention in Cleveland.

Clinton campaign spokesman Nick Merrill said in response to the lawsuit: “While no one can imagine the pain of the families of the brave Americans we lost at Benghazi, there have been nine different investigations into this attack and none found any evidence whatsoever of any wrongdoing on the part of Hillary Clinton.”

On Monday, Smith referred a call from a San Diego Union-Tribune reporter to her attorney Larry Klayman, founder of the conservative group Freedom Watch, who said that while his clients are seeking unspecified monetary damages through their lawsuit, their main goal is justice.

“While (Clinton) may think she’s above the law, the lawsuit will ensure she is not,” Klayman said in a phone interview.

“The damage has been severe, but more important than that, someone needs to put their foot down with regard to the criminal conduct of Hillary Clinton, and my clients are willing to do that,” he said.

In June, the House Select Committee on Benghazi issued its final report, finding no new evidence of culpability or wrongdoing by Clinton.

But the 800-page report included sharp criticism of the Defense Department, the Central Intelligence Agency and the State Department for, as the New York Times put it, “failing to grasp the acute security risks in Benghazi, and especially for maintaining outposts there they they could not protect.”

FBI Director James Comey said in July that although there weren't grounds to prosecute Clinton, she and her aides had been “extremely careless” in their handling of classified information.

The parents contend in their lawsuit that it is “highly probable” that Clinton sent and received information about U.S. Department of State activities and covert operations in Benghazi via the email server she used during her four years as secretary of state.

“This information was compromised from the second that it left Defendant Clinton’s private e-mail server and easily found its way to foreign powers including, but not limited to, Russia, Iran, China and North Korea,” the complaint reads in part.

It goes on to say that because of the way Clinton handled such information, “Islamic terrorists were able to obtain the whereabouts of Ambassador Christopher Stevens… and subsequently orchestrate, plan and execute the now infamous September 11, 2012 attack.”

The plaintiffs also claim that Clinton lied to them and the public after the attack by saying it was the result of a reaction to “an anti-Muslim YouTube video” posted on the internet rather than Islamic terrorists.

The two parents contend that since Clinton announced she was running for president in the 2016 election, she has defamed the plaintiffs by calling them “liars” either directly or indirectly. As evidence, they point to interviews in which they say Clinton denied telling the families that the attack was a result of the video posted on YouTube.

Stevens and Sean Smith were killed at the main U.S. diplomatic compound in Benghazi. Smith was a San Diego native, who attended Mission Bay High School.

Tyrone Woods lived in Imperial Beach. He and fellow CIA security contractor Glen Doherty of Encinitas, both former Navy SEALS from San Diego County, died after the attack on the compound when a separate annex run by the agency was hit by mortars.

Doherty’s mother, Barbara, said Monday that she was surprised to hear that a lawsuit had been filed. She said she does not blame Clinton for her son’s death.

“She was a wonderful secretary of state,” said Doherty, an Independent from Massachusetts, adding that she preferred not to weigh in on the politics of the situation.

Tyrone Woods’ mother, Cheryl Croft Bennett, said she too preferred to stay silent on the political issues related to her son’s death. She stressed that she is not a party to the lawsuit.

“We have chosen to take the high road from day one,” she said. “to honor and respect Tyrone for his great courage.”