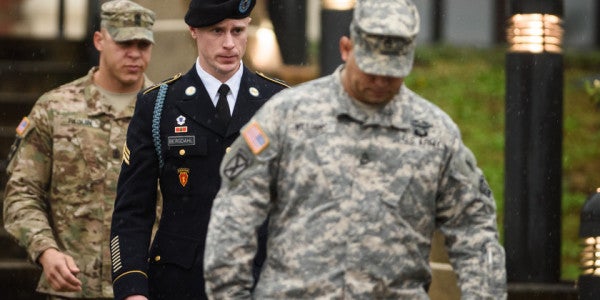 Lawyers for alleged deserter Sgt. Bowe Bergdahl are pursuing uncensored copies of emails they believe show the Trump administration’s attempt to appear impartial by backing off disparaging comments made on the campaign trail.

There are 113 heavily redacted emails at stake – unmistakably between government prosecutors and the White House, according to defense lawyers. The emails were turned over to the defense in a federal Freedom of Information Act request after the military judge denied a defense motion to dismiss the case based on Trump’s campaign-trail criticism.

“These emails confirm, first, that after President Trump became president and during the pendency of (the defense motion to dismiss), his staff was in substantial contact with trial counsel by email, telephone and in person, about (the motion to dismiss),” according to the defense’s motion seeking uncensored versions of the emails.

Second, the defense said, the emails attempt to distance Trump as prosecutors urged the administration to issue a statement similar to a 2013 statement from then-Secretary of Defense Chuck Hagel after President Obama said any member of the Armed Forces found to have committed sexual harassment should receive a dishonorable discharge.

No statement has been released.

“The purpose of that suggestion … was transparently to blunt Sgt. Bergdahl’s apparent unlawful command influence case by trying to build a wall between Mr. Trump’s campaign statements and his views after taking the oath of Office,” according to the defense.

Bergdahl walked off his remote post in Afghanistan in 2009 and was subsequently held by the Taliban for five years. He was released in May 2014 in exchange for prisoners being held at the U.S. military prison at Guantanamo Bay, Cuba.

Charges were served to Bergdahl on Dec. 14, 2015, following an Article 32 preliminary hearing on Sept. 17 and 18, 2015, at Joint Base San Antonio. He is not in pretrial confinement or any form of arrest, according to U.S. Army Forces Command.

The court-martial is scheduled for October at Fort Bragg. He has decided to be tried by a judge, not a military jury.

The emails were discovered in August after the defense submitted a formal request for communications between the Army and others concerning Bergdahl.

The request followed a separate defense motion from May in which lawyers asked the judge to toss out the case because of Trump’s campaign-trial criticism. In that motion, lawyers said Bergdahl’s due process rights had been violated by then-candidate Trump and it would be impossible to receive a fair trial. The military judge overseeing the case, Col. Jeffery Nance, denied that motion.

The Army turned over 113 emails to the defense, which are described as “heavily-redacted emails from Forscom’s files,” according to the motion.

“They were unmistakably emails to and from trial counsel, including a number between trial counsel and White House personnel,” according to the motion.

Defense lawyers also want an order directing Maj. Justin Oshana, the lead prosecutor, to make himself available for an interview, as they intend to call him as witness to the redacted communication.

“Trial counsel’s failure to persuade the White House to ‘Hagelize’ President Trump’s campaign statements shows that – whatever other campaign positions the president has abandoned since 20 January 2017 – so far as Sgt. Bergdahl is concerned, he has not only changed his tune but passed up an explicit opportunity to do so,” according to the defense. “Silence may be golden, but this silence speaks volumes.”