Bergdahl Says Walking Away Was A ‘Horrible Mistake’

Army Sgt. Bowe Bergdahl on Monday became emotional as he recalled the constant torture and beatings he endured for nearly... 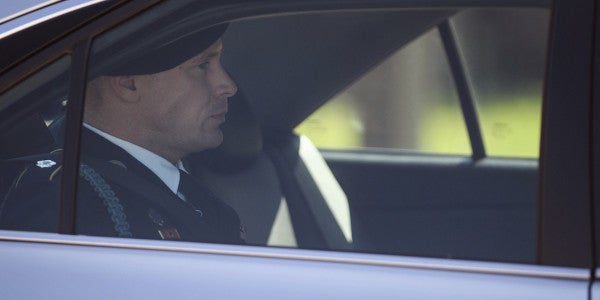 Army Sgt. Bowe Bergdahl on Monday became emotional as he recalled the constant torture and beatings he endured for nearly five years as a prisoner of the Taliban.

Bergdahl, who gave unsworn testimony during his sentencing hearing on Fort Bragg, spoke for about two hours. He paused at one point to get a tissue and to compose himself before continuing his testimony.

Bergdahl walked off his remote post in Afghanistan in 2009 and was subsequently captured and held by the Taliban for half a decade. He pleaded guilty Oct. 16 to desertion and misbehavior before the enemy. His sentencing hearing began last week on Fort Bragg.

In the military justice system, unsworn testimony can be offered only by the victims or by the accused. It can’t be used in cross examinations.

Bergdahl began his testimony by reading a prepared statement. In the statement, he said he was sorry and never intended for anyone to get hurt looking for him. He said walking away was a “horrible mistake.”

“I’m extremely relieved my platoon mates made it back,” he said, reading from his statement.

He added that he was thankful for the determination and sacrifice of those service members who were injured searching for him. He said he understood his apologies could never take away their pain.

Bergdahl’s unsworn statement followed powerful testimony from Shannon Allen, the wife of Master Sgt. Mark Allen, who was shot in the head while searching for Bergdahl in a July 2009 mission. Shannon, who was called as a witness for the prosecution, testified that her role has changed from wife to caretaker of her husband.

Her husband suffered a traumatic brain injury and is confined to a wheelchair and unable to communicate.

Bergdahl, who said he grew up reading books about survivalists, said he joined the Army to gain life experience and pay for college. He said he first enlisted in the Coast Guard in 2006 but was washed out when he had a panic attack during basic training.

Bergdahl said he thought he’d make it through the Army.

Bergdahl, a rifleman with 25th Infantry Division’s 1st Battalion, 501st Infantry, walked off Observation Post Mest in Afghanistan during his first deployment. He recalled how men on motorcycles with AK-47 rifles captured him as he walked through the desert. He was moved to different locations for about a year, he said. He tried several times to escape.

He said his hands and legs were shackled to posts of a makeshift bed. He said his torso and legs would be whipped with copper cables, and the bottoms of his feet were burned with matches. He was constantly shown videos of executions and said his captors also threatened to cut off his head.

After an escape that lasted eight days, Bergdahl said he was captured and moved to an area he had previously been held. This time, he said, he was put in a cage.

Capt. Jennifer Norvell, one of Bergdahl's lawyers, asked Bergdahl how he passed the time for five years.

Bergdahl had been quietly crying.

“I need a moment,” he said, reaching for a tissue.

Bergdahl paused for a few moments.

“Trying to find a way to escape,” he said.

Beyond the torture, Bergdahl said the worst part of captivity was his deteriorating health. He didn’t receive proper nutrition and was confined to small spaces.

He had a hard time controlling diarrhea, he said. He was permitted to wash himself and his clothing once every three or four months.

“The worst was the constant deterioration of everything, the constant pain of my body falling apart,” he said.

Bergdahl said he still suffers from the pain inflicted during his time in captivity and from at least one escape attempt when he fell off a cliff and injured the left side of his body.

Earlier Monday, the court heard from Shannon Allen, whose husband was injured on a search mission.

Defense lawyers objected to her testimony prior to her taking the stand, saying it was unnecessary since Allen’s doctor testified about the soldier’s injuries. The judge limited Shannon Allen’s testimony to the day-to-day impact of his health and present condition of his life.

Shannon Allen said her husband, whom she married in 2006, is unable to wash or dress himself. He must eat through a feeding tube that pumps directly into his stomach, she said.

In a short video played in court, Shannon Allen explained how she gets her husband out of bed using a ceiling pulley system each morning. Sometimes a nurse helps. The process, including a shower and getting dressed, can take up to 90 minutes, she said.

His emotions are limited to smiling, laughing and crying, she said.

His injuries have changed their relationship from martial to caretaker, Shannon Allen said.

“It’s taken away all the interaction, really,” she said.

The injuries also have eliminated the couple’s ability to have more children, she said.

Shannon Allen said her husband will sit with her and their 9-year-old daughter Journey as she does homework. He is not always able to attend events for their children, she said.

Journey, who was 13 months when Allen was shot, likes to climb on her father’s wheelchair and sit on his lap, Shannon Allen said.

“I do my best to keep him involved in his daily activities,” she said.

Defense lawyers did not question Shannon Allen. As she exited the courtroom, she looked straight ahead and did not look at Bergdahl.

Mascarinas, who treats patients with traumatic brain injuries, said when Allen was admitted he was in a vegetative state, meaning his eye were open, but he was not speaking. It took six or seven months for Allen to move from that state to minimally functional, he said.

Portions of Allen’s brain, including the frontal lobes that control tasks such as speaking and a temporal lobe that handles memory, had to be removed, the doctor said. That means Allen cannot do simple things, such as talk, and likely doesn’t remember what happened to him from day-to-day.

Mascarinas said Allen will be severely disabled for the remainder of his life.

Defense lawyers did not question Mascarinas.

The government concluded its presentation of evidence around 11 a.m. The defense began its case Monday afternoon.

Earlier Monday, the military judge said he would not dismiss the charges against Bergdahl because of comments made by President Donald Trump, but he said he would consider them during mitigation as he prepares to sentence the soldier.

The judge, Col. Jeffery Nance, called Trump’s comments “condemning,” but said they don’t hinder his ability to rule over the case. He denied the defense’s renewed motion to dismiss charges of desertion and misbehavior before the enemy.

“I am completely unaffected by Trump’s comments,” Nance said.

During his presidential campaign, Trump repeatedly called Bergdahl a traitor and suggested he receive a harsh punishment.

The court moved into a closed session to discuss classified material around 3 p.m.

The sentencing hearing is scheduled to resume at 9 a.m. Tuesday.