11 of the best military books we read this year 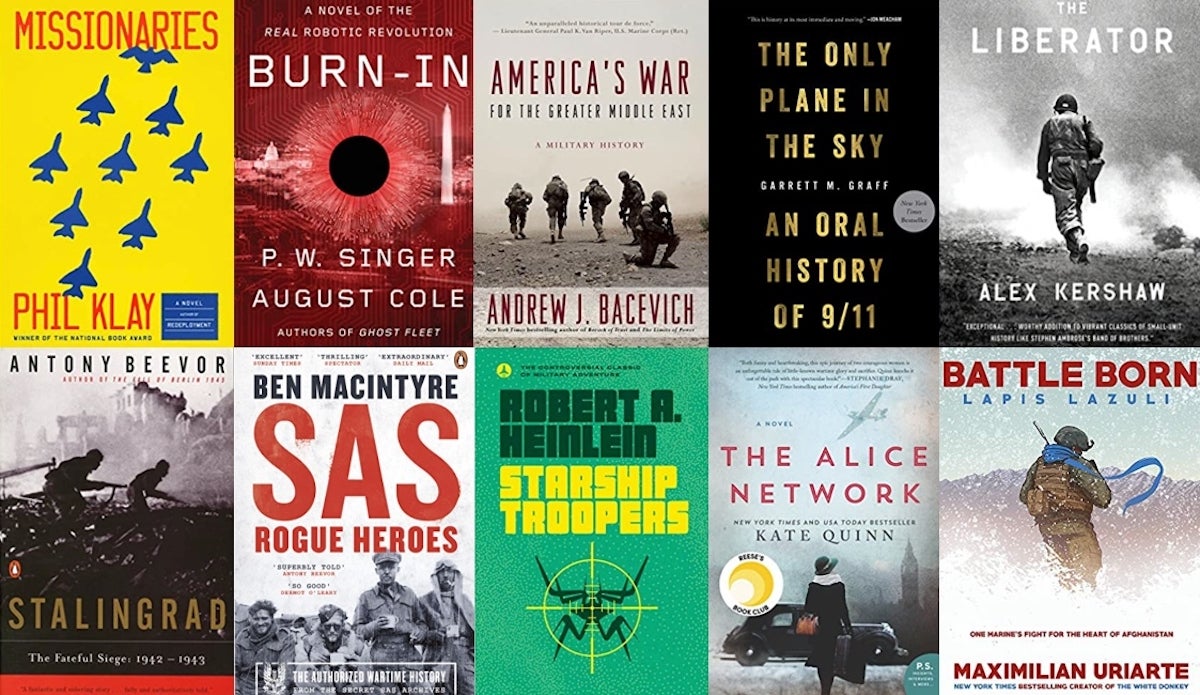 Let’s be real: 2020 has been a nightmare. Between the political unrest and novel coronavirus (COVID-19) pandemic, it’s difficult to look back on the year and find something, anything, that was a potential bright spot in an otherwise turbulent trip around the sun. Luckily, there were a few bright spots: namely, some of the excellent works of military history and analysis, fiction and non-fiction, novels and graphic novels that we’ve absorbed over the last year.

Here’s a brief list of some of the best books we read here at Task & Purpose in the last year. Have a recommendation of your own? Send an email to jared@taskandpurpose.com and we’ll include it in a future story.

I loved Phil Klay’s first book, Redeployment (which won the National Book Award), so Missionaries was high on my list of must-reads when it came out in October. It took Klay six years to research and write the book, which follows four characters in Colombia who come together in the shadow of our post-9/11 wars. As Klay’s prophetic novel shows, the machinery of technology, drones, and targeted killings that was built on the Middle East battlefield will continue to grow in far-flung lands that rarely garner headlines. [Buy]

Written by ‘Terminal Lance’ creator Maximilian Uriarte, this full-length graphic novel follows a Marine infantry squad on a bloody odyssey through the mountain reaches of northern Afghanistan. The full-color comic is basically ‘Conan the Barbarian’ in MARPAT. [Buy]

The Liberator by Alex Kershaw

Now a gritty and grim animated World War II miniseries from Netflix, The Liberator follows the 157th Infantry Battalion of the 45th Division from the beaches of Sicily to the mountains of Italy and the Battle of Anzio, then on to France and later still to Bavaria for some of the bloodiest urban battles of the conflict before culminating in the liberation of the Dachau concentration camp. It’s a harrowing tale, but one worth reading before enjoying the acclaimed Netflix series. [Buy]

The Only Plane in the Sky: An Oral History of 9/11 by Garrett Graff

If you haven’t gotten this must-read account of the September 11th attacks, you need to put The Only Plane In the Sky at the top of your Christmas list. Graff expertly explains the timeline of that day through the re-telling of those who lived it, including the loved ones of those who were lost, the persistently brave first responders who were on the ground in New York, and the service members working in the Pentagon. My only suggestion is to not read it in public — if you’re anything like me, you’ll be consistently left in tears. [Buy]

The Body in Pain: The Making and Unmaking of the World by Elaine Scarry

Why do we even fight wars? Wouldn’t a massive tennis tournament be a nicer way for nations to settle their differences? This is one of the many questions Harvard professor Elaine Scarry attempts to answer, along with why nuclear war is akin to torture, why the language surrounding war is sterilized in public discourse, and why both war and torture unmake human worlds by destroying access to language. It’s a big lift of a read, but even if you just read chapter two (like I did), you’ll come away thinking about war in new and refreshing ways. [Buy]

Stalingrad takes readers all the way from the Nazi invasion of the Soviet Union to the collapse of the 6th Army at Stalingrad in February 1943. It gives you the perspective of German and Soviet soldiers during the most apocalyptic battle of the 20th century. [Buy]

I picked up America’s War for the Greater Middle East earlier this year and couldn’t put it down. Published in 2016 by Andrew Bacevich, a historian and retired Army officer who served in Vietnam, the book unravels the long and winding history of how America got so entangled in the Middle East and shows that we’ve been fighting one long war since the 1980s — with errors in judgment from political leaders on both sides of the aisle to blame. “From the end of World War II until 1980, virtually no American soldiers were killed in action while serving in the Greater Middle East. Since 1990, virtually no American soldiers have been killed in action anywhere else. What caused this shift?” the book jacket asks. As Bacevich details in this definitive history, the mission creep of our Vietnam experience has been played out again and again over the past 30 years, with disastrous results. [Buy]

Burn In: A Novel of the Real Robotic Revolution by P.W. Singer and August Cole

In Burn In, Singer and Cole take readers on a journey at an unknown date in the future, in which an FBI agent searches for a high-tech terrorist in Washington, D.C. Set after what the authors called the “real robotic revolution,” Agent Lara Keegan is teamed up with a robot that is less Terminator and far more of a useful, and highly intelligent, law enforcement tool. Perhaps the most interesting part: Just about everything that happens in the story can be traced back to technologies that are being researched today. You can read Task & Purpose’s interview with the authors here. [Buy]

Like WWII? Like a band of eccentric daredevils wreaking havoc on fascists? Then you’ll love SAS: Rogue Heroes, which re-tells some truly insane heists performed by one of the first modern special forces units. Best of all, Ben MacIntyre grounds his history in a compassionate, balanced tone that displays both the best and worst of the SAS men, who are, like anyone else, only human after all. [Buy]

The Alice Network by Kate Quinn

The Alice Network is a gripping novel which follows two courageous women through different time periods — one living in the aftermath of World War II, determined to find out what has happened to someone she loves, and the other working in a secret network of spies behind enemy lines during World War I. This gripping historical fiction is based on the true story of a network that infiltrated German lines in France during The Great War and weaves a tale so packed full of drama, suspense, and tragedy that you won’t be able to put it down. [Buy]

Hey, it may not be on the Marine Corps commandant’s reading list anymore, but Starship Troopers remains one of the most fascinating portrayals of the future of warfare I’ve ever read, from the powered armor to the proto-fascism. I read it once a year to remind myself just why I love covering military tech so much — and why the prospect of war in space is absolutely horrifying in every way. [Buy]

BONUS: Talk to Me: How to Ask Better Questions, Get Better Answers, and Interview Anyone Like a Pro by Dean Nelson

I loved Talk To Me for obvious professional reasons. It’s a breezy, fun read from a pro on how to be a better interviewer, which certainly helps a journalist like me. But it’s also accessible and open to all and the book will help damn near anyone who needs to ask questions to glean insight in their daily lives — doctors, lawyers, soldiers, teachers — by showing everything from what questions are better to ask to how to structure an interview for the best results. [Buy]

Related: ‘Starship Troopers’ is off the Marine commandant’s reading list, but ‘White Donkey’ by Terminal Lance is in