Democratic presidential candidate Beto O'Rourke on Monday proposed taxing affluent American families who do not have members in the U.S. military as a way to fund healthcare for veterans 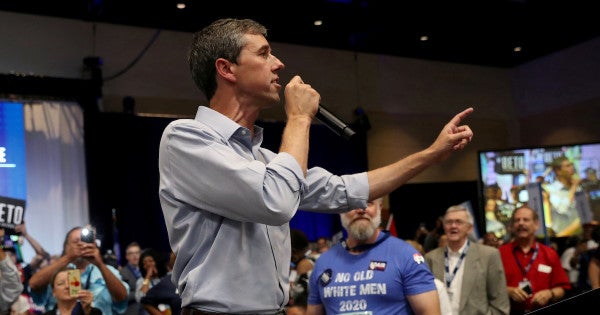 (Reuters) – Democratic presidential candidate Beto O'Rourke on Monday proposed taxing affluent American families who do not have members in the U.S. military as a way to fund healthcare for veterans.

The former congressman from Texas unveiled a plan for military veterans that includes a “war tax,” in which taxpayers who earn over $200,000 a year would pay $1,000 in a new tax for each war embarked on by the United States.

The money raised from the war tax would be deposited into a newly created Veterans Health Care Trust Fund, which would be created at the start of each new war and be used to support veterans' healthcare, disability and other medical needs when they return from conflict, O'Rourke said.

The proposal was part of a broader plan by O'Rourke, who has

struggled to gain traction in opinion polls among Democratic contenders, to improve services for militaryveterans. He also urged an end to “wars in Iraq and Afghanistan,” and reinvestment of the savings in veterans programs.

The military has about 1.36 million active-duty members out of a total U.S. population of some 327 million people. The country's armed forces have been all-volunteer since the military draft ended in 1973 as the United States wound down its involvement in the Vietnam War.

In language borrowed from former Democratic President John F. Kennedy, O'Rourke said Americans must be “willing to pay any price, and bear any burden” to provide care, support and resources to all veterans. He called for ending the “blank check for endless war” waged by the United States and to invest spending on the care of those who had served in armed conflicts.

O'Rourke, 46, launched his presidential bid in March after rising to national prominence last year when he narrowly lost his bid to defeat Republican U.S. Senator Ted Cruz in Texas. His national support among likely Democratic primary voters is currently around 4 percent.