Joe Biden launched a fiery attack on President Donald Trump on Friday over reports that Trump privately called dead U.S. soldiers “losers” and “suckers,” saying that, if true, the statements were “disgusting" 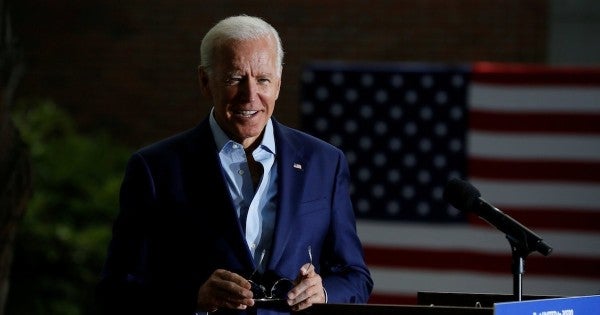 Joe Biden launched a fiery attack on President Donald Trump on Friday over reports that Trump privately called dead U.S. soldiers “losers” and “suckers,” saying that, if true, the statements were “disgusting.” It was one of the most emotional, angry outbursts to date from the Democratic presidential nominee.

“It affirms what most of us believe to be true, that Donald Trump is not fit to be the commander in chief,” Biden said Friday, speaking at the beginning of an appearance in Wilmington, Delaware, about economic news.

Biden’s late son, Beau — who died in 2015 of brain cancer at 46 — served in the military, and Biden has repeatedly cited his death as inspiration for running for president. “When my son volunteered and joined the United States military and went to Iraq for a year, won the Bronze Star and other commendations, he was not a ‘sucker’!” Biden said, shouting.

Trump has come under attack after The Atlantic magazine published an anonymously sourced story depicting the president as repeatedly privately questioning why U.S. soldiers fight and die for their country, and alleging that he didn’t want to go to a World War I cemetery in France filled with American war dead because “it’s filled with losers” and “suckers.”

Trump has vigorously denied as “totally false” the various quotes in the article, which included allegations that he called the late President George H.W. Bush and the late U.S. Sen. John McCain, both military pilots, “losers” for being shot down during World War II and the Vietnam War, respectively.

“It was a terrible thing that somebody could say the kind of things — and especially to me, ’cause I’ve done more for the military than almost anyone, anybody else,” Trump said in the Oval Office on Friday, according to The Associated Press.

The anonymous sourcing of the quotes makes their truthfulness hard to evaluate, though The Washington Post, The Associated Press and Fox News, also citing anonymous sources, have reported Trump making similarly disparaging remarks toward service members in private.

Trump’s denial of calling his rival McCain a “loser” and attacking his military service is undercut by the fact that Trump has indisputably done so, including on his own Twitter account in 2015. Trump publicly criticized McCain as “not a war hero” at a conservative forum in Iowa in 2015, telling an audience “he is a war hero because he was captured. I like people who weren’t captured.” McCain was tortured in Vietnam following his capture.

Biden on Friday said the reported comments were consistent with other Trump statements in the past, citing the president’s treatment of McCain.

“If these statements are true, the president should humbly apologize to every Gold Star mother and father and every Blue Star family that he’s denigrated and insulted,” Biden said. “Who the heck does he think he is?”

In responding to the report about Trump, Biden commented that he had come closer to losing his temper than he ever had during the campaign and that he was trying to restrain himself. When a reporter asked why, noting that some supporters might want to see more passion from him, Biden said, “Because a president should be presidential and lead by example, as well as make clear exactly where they stand.”

The furor could further undercut the president’s reportedly already weak support among active-duty service members, a traditionally more conservative voting bloc. A Military Times poll of 1,018 active-duty troops surveyed in late July and early August, before both parties’ conventions, said about 50% viewed the president unfavorably, with about 38% viewing Trump favorably.

Asked who they supported in the election, about 41% said Biden, 37% said Trump and 13% preferred a third-party candidate.

The Biden campaign, building on the backlash to Trump, held a call with military surrogates early Friday morning to condemn the president’s reported remarks.

Democratic Illinois Sen. Tammy Duckworth, a retired Army National Guard lieutenant colonel who lost both of her legs in the second Iraq War, accused Trump of “belittling the sacrifices of those who have shown more bravery than he’s capable of,” according to The Associated Press.

Khizr Khan, whose son U.S. Army Capt. Humayun Khan died in 2004 in Iraq, and who publicly clashed with Trump in 2016, said on the call that Trump’s “life is a testament to selfishness.”

“Words we say are windows into our souls. So when Donald Trump calls anyone who places their lives in service of others a loser, we understand Trump’s soul,” Khan said, according to the AP.

The controversy emerged as the Trump administration was about to shut down Stars and Stripes, a longtime government-funded news organization dedicated to informing service members and their civilian counterparts in the military. But the Trump administration appeared to back down under pressure Friday as the president continued to act on the defensive.

“The United States of America will NOT be cutting funding to @starsandstripes magazine under my watch,” Trump tweeted Friday afternoon. “It will continue to be a wonderful source of information to our Great Military!”