A motocross rider whose jump over a freeway in Riverside County, Calif., last month became an internet sensation was critically... 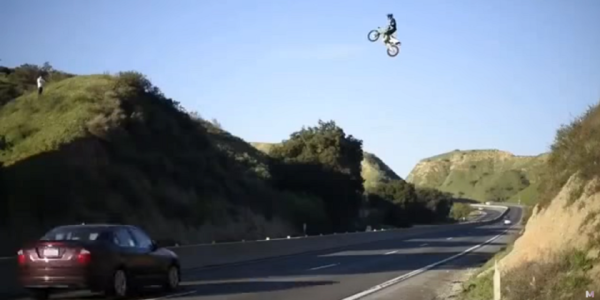 A motocross rider whose jump over a freeway in Riverside County, Calif., last month became an internet sensation was critically injured Sunday after performing a dangerous off-road stunt over train tracks, police said.

Kyle Katsandris, 24, of San Clemente, planned to jump “an expanse across railroad tracks,” according to the Simi Valley Police Department. But at some point, the stunt went horribly wrong.

Emergency responders were called to the scene and Katsandris was taken to a hospital in “critical, but stable condition,” police said.

The police department said it was not made aware of the stunt before it was attempted. Authorities only found out about it when medical aid was sought.

Katsandris’ jaw-dropping stunts have drawn the ire of law enforcement agencies in the past.

Related: A Biker In California Jumped 4 Lanes Of Traffic And Filmed It >>

In March, the motorcyclist posted a video of a stunt on his Instagram account showing him soar across four lanes of traffic on the 60 Freeway. The video has been viewed nearly 180,000 times.

The California Highway Patrol and Riverside County Sheriff’s Department later learned of the jump from social media, but officials weren’t clear if they could prosecute Katsandris.

At the time, CHP Sgt. Randy Costelow said that, going forward, “if anybody is caught doing it, they will be prosecuted.”

The posting forced California transportation department officials to block a long dirt ramp used by Katsandris to jump across the freeway on the north side of the road east of Gilman Springs Road.

Morrison told KTBC-TV the stunt requires the motorcyclist to jump about 160 to 180 feet over the train.

“Pretty much if anything goes wrong, the consequences are really big,” he told the news station.

Morrison told KTBC-TV he warned Katsandris that “a lot of things could go wrong” with the stunt. But he said Katsandris insisted that he thought he could do the jump.

“Just thinking about going for it I give him respect, and truly hope he has a speedy recovery,” Morrison said on Facebook. “Going big on dirt bikes is no joke (and I) still have nightmares of all the things that could have happened back in the day.”