Army and Marine recruits are having a hell of a time getting birth control, and experts say it’s hurting readiness

“If someone wants to have a baby while serving, they should be allowed. But if they don’t want to ... this approach really helps." 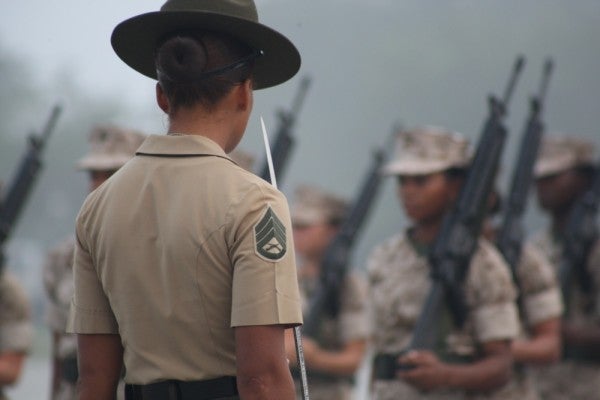 The Marine Corps has learned a hard lesson when it comes to recruit training: While military lessons in protocol, combat, and strategy are paramount, classes on lifestyle subjects, like birth control, also pay dividends in the long run.

In 2016, the service eliminated mandatory education on contraception at its Marine Corps recruit depots, leaving female recruits with only the option of getting birth control training on their own. Since then, Marines can access birth control at sick call once a week outside of working hours or opt to receive long-acting reversible contraception, known as LARC, such as intrauterine devices and implants, in the last two weeks of recruit training.

The year before the class was eliminated, unintended pregnancies among active-duty service women were 6.9%, according to a survey published in 2016 in Military Medicine, a journal published by AMSUS, the Association of Military Surgeons of the United States.

The policy change eliminating the mandatory class has resulted in an additional 67 deliveries a year, 5,601 days of postpartum leave, and 30,937 nondeployable days among female Marines, compared to the year before, according to the American Journal of Obstetrics and Gynecology.

Yet, the service hasn’t budged. The birth control class is still not mandatory. The topic is part of a “period of instruction” all recruits and candidates receive, according to Captain Sam Stephenson, a spokesman for Marine Corps Combat Development Command, referring to Q&A sessions held during training.

Regarding the Marine Corps policy on pregnancy and parenthood, Stephenson wrote in an email that “The Marine Corps will provide education on the policies contained in [Marine Corps Order] 5000.12F to all Marines, male and female, upon initial entry, and throughout their service in the Marine Corps to stress the importance of family planning and the responsibilities of parenthood.”

Last year, a group of researchers led by Dr. Timothy A. Roberts, a retired Navy commander who now works at Children’s Mercy in Kansas City, looked at the relationship between contraception instruction and soldier readiness. The researchers wanted to determine how birth control access and classes at recruit training affected birth rates in the first two years of enlistment.

Their study, which showed varying degrees of contraceptive use and birth rates across the services, left them wondering why the DOD hasn’t stepped in and mandated a standardized curriculum and medical access.

Army recruits have less access to contraception at basic training than any other service, Roberts said.

They found that for methods of birth control considered “highly effective,” including pills, patches, or shots, the Navy had the highest utilization, 37.6%, after it changed its policies in 2015 to increase contraceptive access at basic recruit training. Roughly 27% of Air Force women used one of these methods, and also around 27% of Marines used them, but after the Corps’ policy change in 2016, the number decreased to 24.4%. Just 18% of new Army soldiers used effective birth control, according to the study.

According to Roberts’ research, childbirths in the Army in the first two years of enlistment were 11.1%, nearly twice that of the Air Force, the lowest at 6%.

Army recruits have less access to contraception at basic training than any other service, said Roberts. While they all receive classroom instruction on birth control, sexually transmitted diseases, and other health issues, having to access contraception only at sick call or needing a referral for LARC has made an impact.

Roberts said when there’s access to effective birth control and information on the different methods, there’s a decrease in childbirth rates. But policies that “require servicewomen to navigate the healthcare system on their own” to obtain birth control after finishing basic training can decrease the use of contraception and “increase childbirth rates, and degrade military readiness,” he said.

At Air Force basic training, all recruits receive group education in a course called Healthy Sexual Lifestyles, in which they learn about sexually transmitted diseases, risk reduction, and contraception. Trainees can receive contraception at sick call or once a week at a specialty clinic, and have access to LARC in the last five weeks of basic, although that program has been temporarily suspended during the coronavirus pandemic.

“If someone wants to have a baby while serving, they should be allowed. But if they don’t want to … this approach really helps.”

The Navy provides recruits an overview of available contraception methods with an emphasis on LARC and other effective forms of birth control such as pills, patches, or shots. Recruits also are given a decision-making tool to determine which method, if any, is right for them and must meet with a medical provider to discuss their options one on one. They have access to birth control at sick call or in walk-in contraception-only clinics.

The emphasis on easy access, Roberts said, results in the Air Force and Navy having the lowest birth rates among the services for new personnel.

“If someone wants to have a baby while serving, they should be allowed. But if they don’t want to—and I don’t know that many young women at the start of their careers and are eager are looking to have a baby—this approach really helps,” said Roberts.

Regarding LARC—the most effective contraception administered as an implant or intrauterine device—the Navy again had the highest proportion of service members using it, at 22.7%. The Marine Corps followed at nearly 14.6%, but again, the policy change in 2016 dropped those utilization rates to 7.3%. The Air Force followed at 5%, and finally the Army, at 2.4%.

Not surprisingly, childbirths within the first two years of enlistment were the highest in the Army at 11.1%, followed by the Marine Corps, at 8.4%. The Navy’s childbirth rate was 6.7%, while the Air Force’s was 6%.

Given the impact that unplanned pregnancies have on soldier readiness and the fact that recruits have the same health insurance, Roberts said that the services should consider adopting the same curricula on birth control best practices for all new recruits at boot camp.

“This time period serves as an opportunity to provide women who do not desire pregnancy to obtain a contraceptive method that will prevent pregnancy during their first term of service, including all deployments,” he said.

The Navy adopted an aggressive approach to sex education and contraception access beginning in 2016 when its members faced a 64% unplanned pregnancy rate. In addition to its “LifeSkills” class at recruit training, it opened 22 walk-in contraception clinic between 2016 and 2019 that provide same-day access for active women and beneficiaries.

The clinics have resulted in an increase of 1,200 more active-duty sailors seen each year for contraception, according to Commander Shannon Lamb, chief of women’s health at the Navy Bureau of Medicine and Surgery.

“We recognize that contraception is not only for family planning purposes, but is also incredibly important to our active-duty women for menstrual management and operational readiness should they desire it,” said Lamb.

Yet while the Navy has the highest rate of contraception use, the Air Force stands out as having the lowest childbirth rates. Why this is, Roberts said, remains a mystery.

“The curriculum develops ready airmen for our operational Air Force who are knowledgeable, educating, and empowered,” she said.

Roberts said while there is no evidence that standardization of the sex education curriculum at boot camp will influence childbirth rates among junior enlisted women, he supports the Navy’s more aggressive approach.

After the early results of his work were published in February 2019, he approached U.S. Army Training and Doctrine Command to discuss his findings, where he said medical providers were receptive, but leadership did not “feel it was the right time to make changes to basic training curriculum and policies.”

“DOD is currently doing a force-wide review of women’s health issues, including contraceptive access. The Army may be waiting for the results and recommendations from that panel before making changes,” Roberts said.

“The time to teach this curriculum and get recruits started on contraception is at boot camp. Service members won’t do it at their follow-on schools or first duty stations. They are just too busy,” he said.

Army Training and Doctrine Command, which is responsible for the service’s basic training curricula, referred questions to the Army’s Office of the Surgeon General. That office did not respond to a request for information or comment.