Then-Chief Warrant Officer 3 Christopher C. Palumbo received the Distinguished Service Cross Award on Thursday for his actions during a battle on April 11, 2005 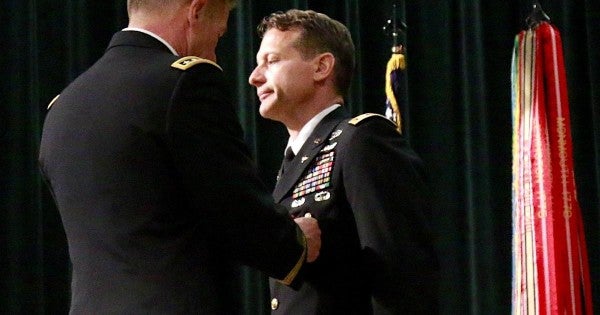 When then-Chief Warrant Officer 3 Christopher C. Palumbo found out he couldn't get back to a battle in Afghanistan, he was so mad that he drop-kicked his flight helmet.

Palumbo, a Black Hawk helicopter pilot, received the Distinguished Service Cross Award on Thursday for his actions during that battle on April 11, 2005. The award is the Army's second highest for valor.

At the time of the battle, Palumbo was with Company A, 3rd Battalion, 158th Aviation Regiment stationed in Germany. He and his crew had reloaded with ammunition and were preparing to head back to a mountainous area where insurgents were attacking Special Forces soldiers. After their bullet-riddled helicopter started leaking fuel, he asked for another aircraft, but was denied.

“I knew they needed us back out there,” said Palumbo, who retired as a captain.

The battle started after the helicopter crew dropped off a Special Forces team near an area where an ambush had occurred. Initially, the soldiers encountered little resistance, but then a large enemy force came out of nearby caves and attacked.

“They were everywhere,” Palumbo said.

The Special Forces team was about to be overrun. Two soldiers were shot. One called for the helicopter to return.

Palumbo immediately started heading back to the area. He attempted to land, but the terrain was rough and the soldiers were near the edge of a cliff.

Apache attack helicopters had been in the area, but had left to refuel. The enemy troops were shooting at Palumbo's helicopter.

One of the soldiers told Palumbo to leave. He replied with “not nice words” and put the helicopter between the enemy troops and the Special Forces team.

Palumbo said he started flying the helicopter in a figure eight so the gunner on one side could shoot while the other reloaded. One crewmember was injured when a bullet hit inside the helicopter and sent shrapnel into his face.

The Black Hawk had more than 50 bullet holes after the battle.

The ceremony was the second presentation of a Distinguished Service Cross at Fort Bragg in less than a week. On June 21, Lt. Gen. Fran Beaudette, commander of U.S. Army Special Operations Command, presented the award to retired Master Sgt. Larry L. Hawks for his actions July 24-25, 2005, in Afghanistan.

Members of the Special Forces team who were in the battle involving Palumbo's Black Hawk attended the ceremony Thursday. McConville praised their actions.

McConville told Palumbo that he represented the best of the Army and the nation.

“What you did saved lives,” McConville said.

Beale, who is now a professor of military science at Temple University in Philadelphia, said he was proud to have served with Palumbo.

“Chris showed us that day what warriors are made of,” Beale said.

Palumbo initially received the Silver Star Medal for his actions. The award was upgraded after the military decided to review medals awarded for actions in Afghanistan and Iraq.

Palumbo, who lives in Edinburg, Texas, is a lead Emergency Medical Services helicopter pilot. He said it was a tremendous honor to receive the award.

“I'm shocked, it was very unexpected,'' he said.