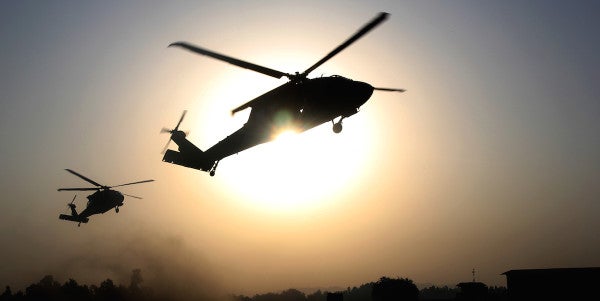 A service member is missing after a U.S. ArmyUH-60 Black Hawk helicopter crashed Friday evening off the coast of Yemen, the Pentagon said.

The helicopter crashed while the crew was training about 20 miles off the southern coast of the country, according to a statement released late Friday by U.S. Central Command.

Five troops who were also aboard the chopper at the time of the accident were rescued, the release said.

“U.S. forces in the region are conducting an ongoing search for one U.S. service member who was aboard the aircraft,” it states.

A small team of U.S. Special Forces troops has been on the ground in the midst of Yemen's civil war in support of an operation against the Al Qaida in the Arabian Peninsula (AQAP) terror group.

The U.S. troops are limited to advisory and intelligence work, but they could be drawn into conflict in self-defense, Navy Capt. Jeff Davis, a Pentagon spokesman, said earlier this month.

The American team has been supporting an offensive by forces of the United Arab Emirates and the ousted government of Yemeni President Abdrabbuh Mansur Hadi. The partnered forces are moving against AQAP strongholds in the Shabwah governorate.

U.S. forces have conducted scores of airstrikes in Yemen and carried out occasional ground raids since Jan. 29, when a Navy SEAL — Chief Petty Officer William “Ryan” Owens, 36, of Peoria, Ill. — was killed in the first military operation authorized by President Donald Trump. Three other SEALs were wounded and a Marine MV-22 Osprey tilt-rotor aircraft was destroyed in the operation.

Since Feb. 28, the U.S. has carried out at least 80 airstrikes in Yemen, including close-air support for UAE and Yemeni government forces.

The amphibious assault ship USS Bataan with several hundred Marines aboard is also operating in the region.