In an unusual step, US Forces Korea permits protests on bases

U.S. service members are exercising their rights as citizens to free speech and assembly on military bases with the approval of Army Gen. Robert B. "Abe" Abrams, commander of U.S. Forces Korea, and other base commanders 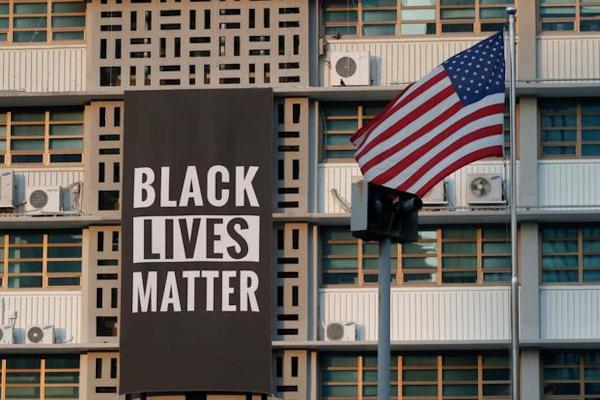 The demonstrators were like those protesting in cities across the United States.

Many wore T-shirts saying “Black Lives Matter” and “I Can't Breathe,” and they took a knee in silence for nearly nine minutes to match the time that a white police officer kneeled on the neck of George Floyd in Minneapolis on May 25. They held candlelight vigils and heard speeches on the evils of racism in a show of solidarity with the similar and ongoing protests across America over Floyd's death.

But there were two major differences between the demonstrations in the U.S. and those that took place in South Korea earlier this month.

The peaceful protesters in South Korea were members of the U.S. military and their families, and they were exercising their rights as citizens to free speech and assembly on military bases with the approval of Army Gen. Robert B. “Abe” Abrams, commander of U.S. Forces Korea, and other base commanders.

On June 11, another demonstration was held at Camp Humphreys, about 60 miles south of the Demilitarized Zone separating North and South Korea, as first reported by Stars & Stripes.

In an emailed statement, Army Col. Lee Peters, chief USFK spokesman, said commanders were “aware of both candlelight vigils and both were coordinated with appropriate authorities prior to execution.”

Abrams also put out guidance from his chief Judge Advocate General before the demonstrations in an effort to let all service members and civilians participating “know what they were allowed and not allowed to do,” Peters said.

The demonstrations at Osan and Camp Humphreys were believed to be the first on any military installation worldwide since Floyd's death. Peters said he was unaware of any others, and Pentagon officials said they also did not know of any.

Military analysts said demonstrations by service members on bases in response to the ills of American society are extremely rare.

“It's unusual, but it's an unusual period” the nation is going through, said Lawrence Korb, a Navy Vietnam veteran and former assistant secretary of defense for personnel in the Reagan administration.

“This is the beginning of a new era” in which military leaders will be more attuned to the legitimate grievances of service members, said Korb, a senior fellow at the Center for American Progress. “What this shows is that the military can be a positive force in society.”

The protesters at Osan and Camp Humphreys were “breaking new ground in a way, but it was entirely appropriate,” retired Army Lt. Col. Jason Dempsey, an Iraq and Afghanistan veteran, told Military.com.

Allowing demonstrations on military bases is “not without its risks,” Dempsey said, but they could be avoided by “putting the focus on core values and beliefs. The key is that this is not partisan.”

“What Abrams is doing, and the way he's handling this is masterful,” added Dempsey, an adjunct senior fellow at the Center for a New American Security.

The outspoken Abrams has also repeatedly been singled out for praise and cited as an example to the rest of the military by Defense Secretary Mark Esper for his aggressive actions in containing the novel coronavirus pandemic in close cooperation with South Korean health authorities, while maintaining the “fight tonight” readiness of the force.

In a follow-up to the demonstrations at Osan and Camp Humphreys, the U.S. State Department in South Korea put on its own show of support for the protests in the States.

The U.S. Embassy in Seoul on June 13 displayed a large “Black Lives Matter” banner on the front of the building, stating in a Twitter post, “The U.S. Embassy stands in solidarity with fellow Americans grieving and peacefully protesting to demand positive change.” Retired Adm. Harry Harris, the U.S. ambassador to South Korea, retweeted the embassy's message and added a quote from the late President John F. Kennedy stating that the U.S. is a diverse nation and “from that diversity we gain strength.”

The banner was removed three days later. The Associated Press reported that the official explanation from the embassy, which didn't mention an LGBT pride flag that was also removed from the building, was that the Black Lives Matter banner was removed to avoid any perception that it was meant “to support or encourage donations to any specific organization.”

For his part, Abrams has been up front in expressing his outrage at the death of Floyd, as well as racism in the ranks.

At a town hall meeting at Camp Humphreys on June 11, Abrams said he was “strongly affected by what happened back in the States. A lot of people are scared, and they're angry. I feel personally a lot of anger and disgust and concern about what's happened.”

Abrams stressed that he was not condoning the violence that has marred some of the mostly peaceful protests, but added, “I fully support our rights as Americans to peacefully assemble and state their views.”

In his 38 years in the Army, Abrams said that the issue of racism “has been considered taboo to discuss,” but the time has now come for candid dialogues in the ranks.

“If you look like me,” meaning a white officer, “now is the time to listen,” he said.

“I've tried real hard to be part of the solution,” Abrams said, but realized “I had fallen way short” in the effort to eliminate “racism and bigotry in our ranks.”

He spoke candidly of how he's treated differently as a black officer in uniform than when he's wearing civilian clothes when back in the States.

As an enlisted soldier at Fort Sill, Oklahoma, Davis said he was the designated driver in civilian clothes for a group of buddies on leave to go to a bar in Oklahoma City.

At the end of the outing, he was going inside to get the last of his buddies and return to the base, Davis said, when he was stopped by a police officer who apparently suspected him of trying to rob cars in the parking lot.

The officer put his hand on his sidearm and said “Get in the effing car,” Davis said. The car drove off, and the officer called for backup.

Davis said that he kept shouting at the officer, “Hey, I'm in the Army, call my captain.”

When a second police officer arrived, “They yanked me out of the car. They're accusing me of 'keying' cars,” said Davis.

He said he kept repeating, “Hey, guys, call my commander.”

They eventually let him go.

“[But] this guy could've just beat the crap out of me,” Davis said.

On another occasion while on leave in his home state of Alabama, Davis said he was sitting with his uncle in a car at a convenience store. For reasons unknown to him, a police officer approached, pointed a shotgun at him and shouted obscenities, telling him to get out of the car.

“Lucky for me, nothing happened, nothing fatal,” he said.

“And that's not unique to me,” he said of the two incidents. “You can talk to a lot of black soldiers and know that this is their reality.”

The lesson he learned, Davis said, was to wear his uniform as much as he could when on leave.

He commended the Army's efforts at combating racism in the ranks but said his concern is that, “We're just hoping it's going to fix itself, and it's not.

“A lot of the answers are in the formation,” Davis said, adding that the only way to find them is to commit to open discussion.