"I was told that I was going to rob someone because I was Black. A student made a noose and put it on his Black roommate's desk as a joke." 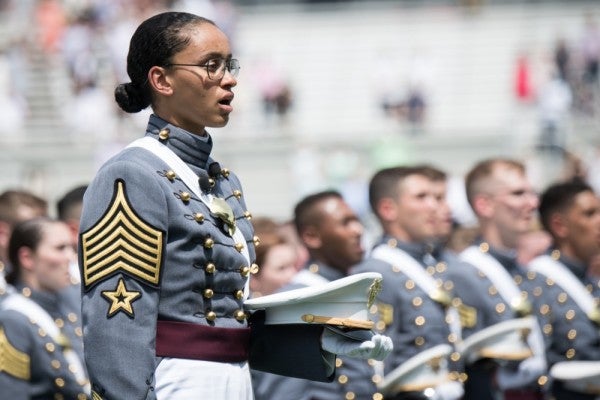 Black cadets at the United States Military Academy at West Point say they were subjected to racially charged harassment and weren't taken seriously when they reported it to authorities at the renowned institution.

Their testimonies were included in a 40-page policy proposal to address the institution's failings in “uprooting the racism that saturates its history” and to remove honors for Confederate soldiers, written by a group of US Army officers, all of them recent graduates and former student leaders at West Point.

Nine former West Point cadets, including 1st Lt. Simone Askew, a Rhodes Scholar and the first Black female to become West Point's First Captain; and 1st Lt. David Bindon, a First Captain and the class of 2019's valedictorian, submitted the June 25 letter to the academy, warning that it “has not taken the necessary strides” to build an inclusive environment, one that “ultimately fails to produce leaders of character equipped to lead diverse organizations.”

“We encourage you to read this proposal in its entirety in order to understand the prevalence of racism at the Academy and our vision for its elimination,” the officers wrote in the letter. “Though we are deeply disturbed, we hold fast to the hope that our Alma Mater will take the necessary steps to champion the values it espouses. Now is the time for action.”

The former cadets outlined three core failings at West Point: the continued presence of “systemic racism;” and the absence of anti-racism education and “anti-racist space.”

The proposal offered a number of solutions to address the claimed failings, including hiring a full-time diversity chair; the creation of a mandatory class that teaches “the intersection between race, ethnicity, gender, and class;” launching an investigation of West Point's donors who may have had ties to white supremacist organizations; and the removal of “all names, monuments, and art honoring or venerating Confederate figures.”

The military academy has several symbols honoring Confederate leaders — the cadet barracks is named after Confederate general Robert E. Lee, who also graduated from West Point and served as its superintendent. While efforts to rename the barracks were spearheaded by lawmakers since 2017, the campaign has gained momentum amid the Black Lives Matter movement throughout the country.

In the proposal, First Lt. Simone Askew, who graduated in 2018, recounted an incident two weeks after she was selected to become the First Captain, the senior leader representing her entire cadet class. Askew wrote she found a note under the door to her room that included “a picture of me holding a rifle, photoshopped with a monkey's face.”

“Though I was aware of the historical precedence of portraying Black people as monkeys, I wondered if the depiction suggested something deeper about my leadership,” she wrote. “Racing through my mind were all the presentations and conversations that I had given in the past 14 days as First Captain and whether I had made any mistakes.

“This self-interrogation fueled in me a paralyzing fear,” she added.

Askew developed a strategy to “perform flawlessly” during her tenure at West Point and remained “optimistic that I had finally done enough.”

Despite her efforts; however, Askew said that racist caricatures continued to spread online.

“One of the popular images even depicted me as Satan himself,” she wrote. “Am I an animal, am I a demon, or am I human?”

The letter also included some testimonials from the cadets in 2020. Many of them said they were ignored or even retaliated against for reporting these incidents. We are “consistently silenced and shunned by our Chain of Command and peers when we speak out against racist behavior,” one person said.

“I was called a 'n—-' during my freshman year at West Point,” one person wrote. “I was told that I was going to rob someone because I was Black. A student made a noose and put it on his Black roommate's desk as a joke. I was called 'white' because I speak intelligently, which is built on the assumption that white people speak better than Black people. These are just a few of many examples.”

Related: The Tragic And Ignored History Of Black Veterans

A woman who identified herself as the only Black female in her company's class, recounted her experience with discussing the topic of race with her colleagues:

“But one day I sat with a group of white males in my company during dinner. Martin Luther King Jr. Day was coming up. One of them mentioned how his teacher made him feel 'guilty' about being white because of the oppression their ancestors put upon minority Americans for hundreds of years. The Cadet explained how he should not feel guilty because he was not the one that caused the pain.

“However, I mentioned how it is important to recognize the privilege young, white, straight, Christian males reap due to the power dynamic white men have created in American society. Once I said those words, I was suddenly being shouted at by every white male at that table. I was being told that I was 'crazy and racist,' that 'African Americans should do the same because of affirmative action,' and 'You're only saying that because you're Black.' I have learned that the 'respect for other races' at West Point is simply a coverup for the underlying racism that this institution tolerates.

“This is especially saddening to me because I chose to attend this place because I thought that racism would be addressed.”

One cadet who received high marks for some of West Point's training classes said he was taken aback by one of the grades.

“Military performance has always been my strongest pillar. It therefore surprised me when my squad leader told me my force distributed grade for the detail. He said he would have graded me higher if I had done more to be part of the group.

“As someone who made sure to integrate himself into the group by hanging out with them during free time and sharing personal stories, I found it hard to believe that I was not integrated well enough. When I asked for examples, he cited my lack of interest in country music or my failure to try dipping tobacco during summer training.”

West Point's class of 2023 included 1,190 candidates, 400 of whom were minorities, according to a press release last year. Of the candidates, 180 are Black, 145 are Hispanic Americans, 99 are Asian-Americans, and 19 are Native Americans.