Watch Bob Dole Stand Up From His Wheelchair To Render A Final Salute To President George H.W. Bush

Former U.S. Sen. Bob Dole, who's 95-years-old, on Tuesday stood up from his wheelchair in the U.S. Capitol Rotunda to... 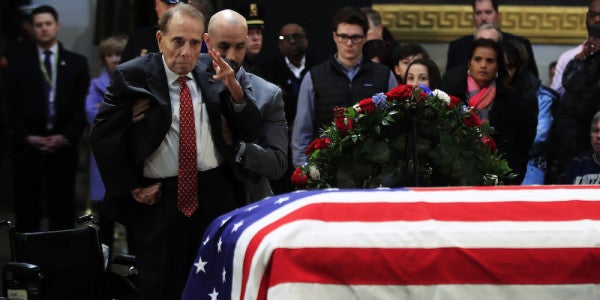 Former U.S. Sen. Bob Dole, who's 95-years-old, on Tuesday stood up from his wheelchair in the U.S. Capitol Rotunda to salute the casket of former President George H.W. Bush.

It was an emotional, powerful moment, particularly given the history the two men share.

Bob Dole, at 95 years old, stands from his wheelchair to salute George H.W. Bush in the Capitol Rotunda pic.twitter.com/z6NdG7exZx

Like Bush, the former Republican senator is a war hero and served with distinction in World War II.

Dole also competed against Bush for the Republican nomination for president twice in 1980 and 1988.

Both men lost to Reagan in 1980, though Bush went on to be Reagan's vice president before winning the GOP nomination and ultimately the presidency in 1988.

Dole ran a final campaign for president in 1996, this time winning the GOP nomination. In the end, however, he lost the election to incumbent Democratic President Bill Clinton.

Bush, the 41st President of the US, died at the age of 94 on November 30 and is being remembered across the nation this week as a lifelong public servant and dedicated family man.