The bodies of seven missing U.S. sailors have been found aboard the guided-missile destroyer that collided with a merchant ship... 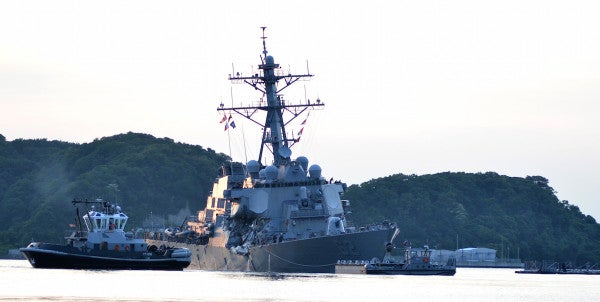 The bodies of seven missing U.S. sailors have been found aboard the guided-missile destroyer that collided with a merchant ship off the coast of Japan, the Navy said late Saturday.

Search and rescue crews gained access to the spaces that were damaged during the collision, and the bodies were found below the water line in the flooded berthing compartments, the Navy said.

“The families are being notified and being provided the support they need during this difficult time. The names of the sailors will be released after all notifications are made,” the Navy said in a statement.

The Navy, along with the Japanese Coast Guard, had been searching for the seven at sea. The Dewey, another guided missile-destroyer, and two Navy tugs had been dispatched to provide assistance.

The Fitzgerald sustained significant damage and began taking on water after a collision with the Philippine-flagged merchant vessel ACX Crystal at approximately 2:30 a.m. local time Saturday while operating about 56 nautical miles southwest of Yokosuka, Japan.

Three sailors required medical evacuation, including the ship’s commander, Cmdr. Bryce Benson. The sailors are under observation at the U.S. Naval Hospital Yokosuka and have been in stable condition.

It remains unclear how the collision occurred, but the Navy said the damage affected the Fitzgerald’s forward starboard side above and below the water line, causing significant damage and flooding to two berthing spaces, a machinery space, and the radio room. The ship arrived in Yokosuka and was inspected by divers.